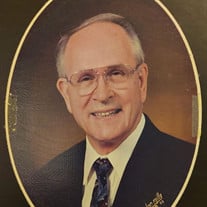 Minister and Professor, Dr. William Bryce Evans, affectionately known as Brother Evans, of Mobile, Alabama, completed his earthly work and exchanged his cross for a crown on Tuesday, April 5, 2022. Bryce lived a full, rich life ardently pursuing his two passions: practicing and teaching Speech & Hearing, and sharing the Gospel and Love of Christ to everyone. Born as the eldest of four to Herman and Merle Evans on April 25, 1929, in Fort Worth, Texas, Bryce grew up in the state of Mississippi, attending Newton High School, Clarke College, and Mississippi College, pursuing a career in education in Speech Pathology and Audiology. He earned a Master's degree from the University of Southern Mississippi and his Doctorate through Walden University. In 1967, Dr. Evans was the original head and director of the Speech and Hearing Center at the University of South Alabama, where he taught for over 30 years helping to develop a prestigious and well-known Doctorate program, while authoring two college textbooks and publishing a paper entitled Managing Dysphagia in the New England Journal of Medicine. He also provided private sessions to individuals in correcting speech and hearing problems and assessments to countless kindergartners through the Headstart program in Mobile County. Brother Evans’ greatest eternal work began at the age of 21, when he was ordained as a Baptist Minister at First Baptist Church, Clinton, Mississippi. He spent his remaining 72 years preaching the gospel of Christ to the lost and sharing the Love of Christ individually to everyone he encountered. Serving as a bi-vocational minister for many of those years, Brother Evans pastored several churches in Mississippi including Sand Hill, West Ellisville, Spring Creek, Poplar Springs, and Agricola Baptist, and three churches in the Bayou La Batre, Alabama area, Sans Souci, Herron Bay, and Higher Ground Baptist. His heart was always dedicated to loving people regardless of their situation, background, or social status. He was an example of Jesus to everyone he met. While pastoring at Sans Souci, Bryce met and married his bride and co-laborer in Christ, the former Joan Marie Davis from Bayou La Batre. Both served the Lord faithfully and lovingly together for 66 years. He was father of three children, and “Granddoctor” to five grandchildren and four great-grandchildren. Bryce was preceded in death by his wife, Joan Marie Davis Evans; parents, Selby Herman and Lula Merle Evans; sisters, Polly Rainey and Joy Vance; and brother Allison Evans. He is survived by children, Dinah Evans Byrd (Tim), Donald Bryce Evans (Claudia), and Dana Evans Walters (David); grandchildren, Susanne Byrd Napp, Levi, Ezekiel, Seth, and Hallie Ruth Walters; great-grandchildren, Davis, Bryce, Mary Carolyn, and Cameron Napp; other relatives, and friends. Visitation will be held on Sunday, April 10, 2022 from 2-4 pm at Serenity Funeral home followed by a service at 4pm in the chapel. Livestream will be provided at www.serenityfuneralhome.com for those unable to attend. In Lieu of flowers, memorials may be made to the University of South Alabama Dr. Bryce Evans Endowed Scholarship Fund at http://giving.southalabama.edu/evans

The family of William Bryce Evans created this Life Tributes page to make it easy to share your memories.

Send flowers to the Evans family.