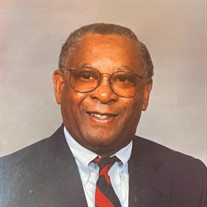 Thomas was called to his heavenly home on April 12, 2022. Thomas was born in Lower Peach Tree, Alabama on September 11, 1935 to Fannie and Thomas King, Sr, who preceded him in death. On June 14, 1969 he married the love of is life, Thelma Neal King. After graduating high school in Mobile, Alabama, Thomas attended Alabama State University prior to joining the United States Air Force during the Korean War. Thomas completed his college education at California State Los Angeles with a Bachelor of Arts in Business Administration. Upon graduation he was recruited by Ford Motor Company as a Labor Relations Representative and relocated his young family to Northern California. Thomas enjoyed recruiting and training young graduates from Historically Black Colleges and Universities (HBCUs). Thomas loved the Automobile Industry and continued his career at New United Motors, the joint venture between General Motors and Toyota, when Ford closed. Thomas had the opportunity to return to Japan on several business trips and remember some of the Japanese he learned in the Air Force. He was passionate about participating in contract negotiations throughout the years. His leisure time in the winter was spent snow skiing with his family and friends. Thomas’s love of skiing ultimately resulted in retirement in Reno, Nevada. Thomas was a member of Omega Psi Phi for more than 60 years and a founding member of Alpha Nu Nu with the Reno, Nevada chapter. He was preceded in death by his parents; brothers, Herbert King and John Franklin King; and child, Kelvin of Naperville, Illinois Thomas is survived by his children, Felcia of Naperville, Illinois, Bridget of Sacramento, California, and Kimberly King of Livermore, California; grandchildren, Robert, Thomas, Adora, Danica, and Lillie; other relatives, and friends. Visitation will be held on Saturday, April 30, 2022 from 12-1 PM, followed by graveside service at 1 PM. Interment will be held in Lawn Haven Memorial Gardens.

Thomas was called to his heavenly home on April 12, 2022. Thomas was born in Lower Peach Tree, Alabama on September 11, 1935 to Fannie and Thomas King, Sr, who preceded him in death. On June 14, 1969 he married the love of is life, Thelma Neal... View Obituary & Service Information

The family of Thomas King Jr. created this Life Tributes page to make it easy to share your memories.

Send flowers to the King family.