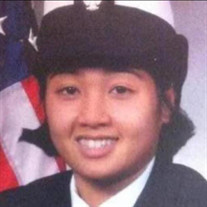 On Tuesday, September 21, 2021, Heaven gained a beautiful angel. During her battle with the COVID-19 virus, Vicki suffered many complications such as many strokes and issues involving her lungs along the way for 2 months. A week before her passing, she broke her fever, was taken off her ventilator, and became responsive while working with a physical therapist to gain strength to sit up again. During that time, we thought we were getting our Vicki back. However, her progression took a sudden turn for the worse on Friday, September 17, 2021, and through it all Vicki fought as long and hard as she could and we are at peace knowing she is no longer dealing with such pain. Vicki is now our guardian angel. As we all know, Vicki has personally touched and impacted so many lives in the 29 years she was here with us. Her presence always offered such peace, love, and joy that will never be forgotten. Vicki enlisted into the the U.S. Navy on November 4, 2013. She served as an Aviation Warfare Specialist and was stationed at Norfolk, Virginia. Serving in the Navy was one of the best thing in her lifetime. She was very proud to be a sailor. She had recently accomplished her Bachelor's degree at Florida International University, and was in the process of completing her pre-reqs for PA school. She was the light in many lives and there is not a doubt that Vicki lived her life to the fullest and helped anyone any chance she could. Vicki is survived by her loving parents, Soukanh Viravong and Pamela Rattanavichit of Grand Bay Alabama; and her brothers, Kyle and Wally. Vicki's family is very grateful for all the donations and love and support from her friends and family. Funeral service will be on Friday, October 8, 2021, at the Serenity Funeral Home Chapel. Address: 8691 Old Pascagoula Rd, Theodore, AL 36582 Buddhism Blessing Ceremony Time: 10a-12p Military Honors Burial: 2:30pm at the Alabama State Veterans Cemetery, Spanish Fort Address: 34904 AL-225, Spanish Fort, AL 36577

On Tuesday, September 21, 2021, Heaven gained a beautiful angel. During her battle with the COVID-19 virus, Vicki suffered many complications such as many strokes and issues involving her lungs along the way for 2 months. A week before her... View Obituary & Service Information

The family of Savivanh Viravong created this Life Tributes page to make it easy to share your memories.

Send flowers to the Viravong family.