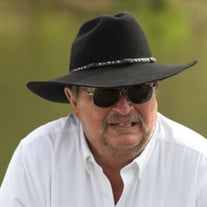 Mr. Robert R. Moss, Jr., a resident of Chunchula, AL, was born February 7, 1949, and departed his earthly home on Saturday, May 22, 2021 on "Moss Hill." "Bob" was a retired foreman of Local 119. He was a deacon at Azalea City Church of Christ where he protected and greeted everyone that walked through the front entrance on Sunday mornings. Above all, he was a dad, papa, and BobBob that adored his family. His legacy of working, fishing, hunting, Alabama football, and enjoying the great outdoors began many years ago. Every generation of children and grandchildren with bouncing blonde curls has followed behind him on Moss Hill. Whether they were working, riding the lawn mower, fishing, or just messing around, it was always a wonderful sight to behold. He has instilled his love and appreciation of "Moss Hill" in all of us. To say he will live on forever on Moss Hill is an understatement. When Bob ended a phone call with someone in the family, he did not say, "bye;" that was too final for him. Since this is not a final goodbye, in his words we say to you, "Love you, later!" He is preceded in death by his loving wife of 50 years, Belinda Moss; his parents, Robert, Sr. and Doris Moss; brother, Roger Moss; and in-laws, Gerald and Pauline King. He is survived by his daughters, Wanda Moss Estes and Brandi (John) Moss; grandchildren, Brittany (Jamie) Moss, Emily (Terry) Hall, Cullen Estes, Jennifer Estes, and Madison Moss; great-grandchildren, Hayzlee Hall, Lillian (Rae) Moss, and Tripp Hall; sister-in-law, Christy (Stan) Cordrey; sister, Jean (Dale) Ward; and a host of nieces, nephews, other relatives, and many friends. In addition to blood family Bob had a chosen family, Steve and Priscilla (Dalton and Haily) Butler and their family; Susan and Taylor Thomas; and many others Bob called family. Join the family for a memorial service June 5, 2021 at Azalea City Church of Christ. Visit with the family starting at 10 AM, followed by a service at 11 AM.

The family of Robert Ray Moss Jr. created this Life Tributes page to make it easy to share your memories.

Send flowers to the Moss family.