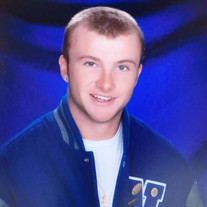 Mark Tyler O’Dell, 24, of North Hanover, NJ, passed away suddenly on Thursday, November 18, 2021, in Gaffney, SC. Tyler was predeceased by his grandfathers, Travis O’Dell and Leo Kurowski; he is survived by his parents, Mark and Connie O’Dell of North Hanover; his sister, Courtney (Ryan) Gauze of Columbus, NJ; sister Kelci O’Dell of North Hanover, NJ; his grandmothers, Nobia O’Dell of Mobile, AL, and Gail Kurowski of Cabot, AR, and numerous family members, beloved friends, and treasured teammates. Born in Willingboro, Tyler was a lifelong New Jersey resident. He attended Northern Burlington County Regional High School. Following graduation, Tyler received his Associates Degree from Rowan College at Burlington County in 2018. He then received his Bachelors in Sport Management at Limestone University in 2020, and was in the process of finishing his Bachelors of History. Tyler was looking forward to his upcoming trip to Spain with the Limestone University History Department. “Tybo”, as he was loving called by his family and friends, was a history buff and a passionate sports fan. He loved the Atlanta Braves, New Orleans Saints and was fanatic about Auburn University Football. He played football, basketball, and baseball throughout his short life. His happiest moments, unquestionably, occurred when he was with his friends on the baseball diamond. Tyler, a four-year standout in high school with the Northern Burlington Greyhounds, posted 126 hits, 102 runs, 75 stolen bases, 39 doubles, and eight homeruns during his high school career. Tyler holds the program record for career pitching wins (21) and stolen bases (75) and was a four-time All-Conference selection while earning All-Area and all-County honors in each of his last three years. Tyler was named Team Defensive MVP during his freshman and sophomore years, and in his sophomore year, Tyler’s baseball team advanced to their first ever sectional championship. In his junior year, Tyler was named Team Offensive MVP. Tyler was selected for All-State accolades during his senior season after batting .384 at the dish, posting a 6-0 record as a starting pitcher, and guided the team to the New Jersey State Championship Game. Tyler was also a standout on the football team. He passed for over 1,700 yards and rushed for over 1,000 yards during his final two seasons and guided the team to a runner-up finish in the state championship during his sophomore season. He also lettered in basketball. Since 2018, Tyler, or “Deez” as his teammates lovingly called him, played baseball for Limestone University. He was named All-Conference Carolinas in 2020 and was an Academic All-Conference Carolinas selection in 2019. In his three previous seasons at Limestone, he batted .267 with eight doubles, a triple, 15 RBIs, and 18 runs. He batted a career-high .316 over 22 games and posted a .444 on-base percentage in 2020. Besides being a talented and gifted athlete, Tyler was a warm-hearted, generous, and loving son, brother, grandson, nephew, teammate, and friend. He will be missed forever and always, until we see him again in heaven. Visitation will be held at Serenity Funeral Home on November 29, 2021 from 10 AM-12 PM, followed by service at 12 PM. Interment will be held in Serenity Memorial Gardens. A Celebration of Life Service will be held on Saturday, December 18, 2021, at New Egypt Firehouse at 59 Main St. New Egypt, NJ from 4-7pm. In lieu of flowers, contributions may be made in Tyler’s memory to the American Brain Foundation to support Epilepsy Research or General Research for Diseases of the Brain and Nervous System. https://give.americanbrainfoundation.org/give/346367/#!/donation/checkout

Mark Tyler O&#8217;Dell, 24, of North Hanover, NJ, passed away suddenly on Thursday, November 18, 2021, in Gaffney, SC. Tyler was predeceased by his grandfathers, Travis O&#8217;Dell and Leo Kurowski; he is survived by his parents, Mark and... View Obituary & Service Information

The family of Mark Tyler O'Dell created this Life Tributes page to make it easy to share your memories.

Send flowers to the O'Dell family.