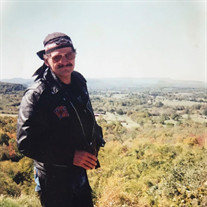 James Chris Nicholas, age 79, born December 10, 1942, passed away on Wednesday, April 20, 2022 surrounded by the love of his family and friends. His passing was peaceful and pain-free. He was a veteran, Harley enthusiast, freedom activist, lover of this country, who had a big heart and tremendous work ethic. "Nick," as most affectionately knew him, lived life on his own terms and with a passion few could compare. Nephew, Jimmy Jackson, shares a favorite memory reflecting the "Nick" we all knew and loved: "When I was 14 or 15, I was working with Uncle Nick and Dad installing flooring during the summer with my brother. It just so happened to be the summer The Knack put out the song, 'My Sharona.' It was enormously popular and was played often on the radio as it had that infectious beat. Every time it came on the radio Uncle Nick would launch into his 'special' dance. The best way of describing it was the Twist meets the Village People. It was hilarious watching him gyrate, swinging his tool belt all over the place. It’s been 40+ years since then, but I still remember it like it was yesterday. It was always hard-work when you were with him, but it was always entertaining." The legacy of his lifelong passions (besides his special dance skills) include cooking, riding his Harley on the big road, his generosity in helping others, and his ever-present humor and free spirit. Later in life, he would also take up volunteer work at a local animal rescue organization, which brought him a great deal of joy and the addition of 2 cats he named Smokey and Lil'Bit. Nick loved his country and served a tour of duty in the Navy. With his diverse and multiple interests, he would work in many jobs but ultimately settled on being a part of the Nuclear Plant Industry in which he made many life-long friends spanning decades. To those closest to Nick, he was a generous man with a big heart. His sense of humor and laughter was a charming hallmark of his personality. His laughter bellowed loudly from his tall frame, followed by a bear hug or pat on the back. With Nick's huge presence, it was nearly impossible to forget him. He leaves his imprint and love on the hearts of many. No doubt, Nick has returned again to his beloved Harley and is riding the open road with the wind once more in his face. We can imagine him looking back with a big smile and saying "I'm blowing this joint. Love you all!" "Don’t fear dying, fear not living. Let’s ride." Nick is preceded in death by his parents, Chris and Anne Nicholas; sister, Christine Carter; and beloved cat, Smokey. Family members left to cherish his memory are sister, Flo (Jack) Jackson; nieces, Annette Belanger (Bill Lewin) and Teresa Ehlers; nephews, Michael (Teresa) Jackson, Jimmy (Michelle) Jackson, and Philip (Gina) Jackson; many great-nieces and nephews; other relatives and great friends. Special love is given to his dear friend, Evelyn Gilbert, who remained by his side to his last breath; and his loving cat, Lil'Bit Queen kitty. A Celebration of Life for Nick will be announced at a later date.

James Chris Nicholas, age 79, born December 10, 1942, passed away on Wednesday, April 20, 2022 surrounded by the love of his family and friends. His passing was peaceful and pain-free. He was a veteran, Harley enthusiast, freedom activist,... View Obituary & Service Information

The family of James Chris Nicholas created this Life Tributes page to make it easy to share your memories.

Send flowers to the Nicholas family.