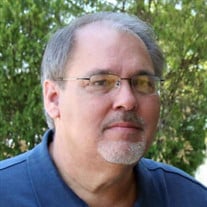 Dr. James G. Graham, age 65, of Semmes, AL, returned to his heavenly home on November 27, 2021, from natural causes. He was a beloved husband, father, grandfather, and friend. He was preceded in death by his grandparents, Marvin and Myrtle Graham and Joseph (“Jos”) and Leona Daigle; as well as his father-in-law, Bertist C. Rouse. He is survived by his loving wife of 38 years, Sharlene; four sons, Jonathan (Mandi) Graham, Matthew Graham, James (“Jamie”) Graham, and Anthony (Sarah) Cummings; daughter, Elizabeth (Bernie) Donlin; four grandchildren, Noel Harris, John Donlin, Lee Graham, and Emmanuel Cummings; father, Donald (Betty) Graham; siblings, Davis Graham, Lita Graham, Paul (Staci) Graham, Brian (Jennifer) Graham, and Pam Graham; and a host of nieces, nephews, cousins, and many friends he considered family. James was the third child born to Donald and Mona Graham on January 5,1956 in Pasadena, Texas. He received Christ as his Lord and Savior in his teens in the First Baptist Church of Houston, TX and devoted his life afterward to serving the Lord. After graduating from Ross Sterling High School in Houston, TX, he went on to Lon Morris College in Jacksonville, TX to earn an Associate's Degree in Graphic Arts. He then attended Christ for the Nations Bible School in Dallas, TX. While there, he met a fellow student who became the love of his life, Anna Sharlene Rouse, the daughter of Bertist and Anna Merle Rouse. Mr. Bertist Rouse would later become a major influence in his life. He and Sharlene married May 14,1983. Together, they worked in ministry. Their lives revolved around raising their family and working for the Lord. They both moved south to Lucedale, MS and then settled in Semmes, AL. He continued his education by earning Bachelor's and Master's degrees in Ministry from the International College of Bible Theology. He earned a Doctorate in Leadership and an Honorary Doctorate in Missilogy, both from the Midwest Theology Seminary. He also obtained a Life Coaching Degree from Oklahoma Christian University. In the mid-90s James began working with his father-in-law, Bertist Rouse, who was founder of International Gospel Outreach (IGO), which is a mission-minded non-profit organization that worked in many countries to design and equip people in the body of Christ to know and fulfill their calling in ministry. Upon the death of Mr. Bertist in November of 2003, James was appointed to the position of President and Director which is the position he held until he passed on. James was a man who had many things on his plate, but managed to get everything he set out to do done. He loved ministering, coaching, gardening, remodeling, graphic design, and spending time with his wonderful family and friends, especially the family barbecues. He was full of joy and loved to make people laugh. He never met a stranger and never wasted a moment. He was greatly loved and loved life to the fullest and will be greatly missed by all who knew him. Memorial services for James Graham will be held in Life Church of Mobile, AL located at 8701 Zeigler, Blvd Mobile, AL on December 11, 2021 from 2:00-4:00 pm. The family requests that expressions of sympathy take the form of donations made in honor of Dr. James Graham to International Gospel Outreach or a charity of your choice.

Dr. James G. Graham, age 65, of Semmes, AL, returned to his heavenly home on November 27, 2021, from natural causes. He was a beloved husband, father, grandfather, and friend. He was preceded in death by his grandparents, Marvin and Myrtle Graham... View Obituary & Service Information

The family of James Glenn Graham created this Life Tributes page to make it easy to share your memories.

Send flowers to the Graham family.