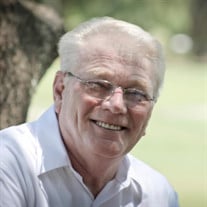 On Thursday, August 19, 2021, Charles Anderson Roberson, Sr., age 71, affectionately known as Charlie or Little Charlie, passed away at his home in Semmes, AL while being surrounded in love by his family. He was the oldest of 8 children born to Charles Vernon Roberson and Mildred Louis Silvers Roberson. Charlie proudly joined the Merchant Marine service at 16 years old and traveled the world for several years before settling down with his beloved wife of 53 years, Wanda Mott Sue in 1968 and they had 3 children together. Charlie worked as an independent contractor in the construction industry for several years before he started a career in hospital construction. He worked for Infirmary Health systems for 27 years, Thomas Hospital for 7 years, and retired as the construction manager over Infirmary health systems, Thomas Hospital, and North Baldwin Health facilities. Charlie is listed in the Cambridge Who’s Who of executives, professionals, and entrepreneurs around the globe where he is acknowledged for his expertise in all aspects of the construction field and he was awarded the very first Manager of the Quarter award at Thomas Hospital. Charlie had many hobbies. He loved fishing, hunting, bowling, softball and most of all woodworking. He was an avid Alabama football fan (ROLL TIDE!). However, his greatest love was for that of his family and friends. He had a generous heart and never missed an opportunity to help someone in need. Charlie is preceded in death by his parents, Charles Vernon Roberson and Mildred Louis Silvers Roberson; and 2 of his brothers, James Earl Roberson and William Roberson. Left to cherish his memory is his wife, Wanda Sue; 3 children, Charles Anderson (Denise) Roberson, Jr., Christopher Land (Sandy) Roberson, and Sherry Lynn (Mark) Williams-Doggett; 7 grandchildren, Chelsey, Cameron, Ethan, Carson, Riley, Ryan, and Sidney; 2 great-grandchildren, Charly Grace (his namesake) and Jadalynn; 4 brothers, Robert (Lorna) Roberson, Albert (Sandra) Roberson, Aubrey (Susan) Roberson, and Terry Roberson; sister, Brenda (Albert) Hanke; and many nieces, nephews, cousins, and friends. Charlie was the true measure of a man and will be greatly missed by all who knew him. Visitation will be held at Serenity Funeral Home on Saturday, August 28, 2021 from 12-2 PM, followed service at 2. Interment will be held in Serenity Memorial Gardens.

On Thursday, August 19, 2021, Charles Anderson Roberson, Sr., age 71, affectionately known as Charlie or Little Charlie, passed away at his home in Semmes, AL while being surrounded in love by his family. He was the oldest of 8 children born... View Obituary & Service Information

The family of Charles Anderson Roberson Sr. created this Life Tributes page to make it easy to share your memories.

Send flowers to the Roberson family.