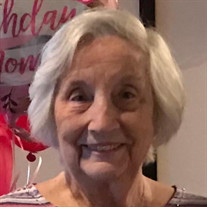 Barbara “Bobbie” O’Neal Newhouse, age 93, went to meet her maker on March 28, 2022. She was a resident of Keller, TX since 2009, moving there from Mobile, AL to be closer to her daughter and son-in-law. She was born in Augusta, GA on December 20, 1928, at the home of her maternal grandmother. She was never given a middle name, nor did she receive a birth certificate until the age of 48. Her father presented a hospital bill and certified letter attesting to her birth so that she could get the birth certificate needed to apply for a U.S. Passport. The family moved around the country following her father’s job as an insurance adjuster. Stops included Charlotte, NC, St. Louis, MO, Little Rock, AR, Texarkana, AR, and Tyler, TX. She graduated from Tyler High School and attended Tyler Junior College, where she was a member of the famous “Apache Belles.” Their costumes were designed using Bobbie as the model. She met the love of her life “Charlie” in 1949 and married a year later. Their favorite pastime was dancing. Their first child, Brenda, was born in Tyler in 1951. The family moved to Van, TX six months later. Their second child, Linda, was born in 1955, but drowned in a stock pond behind the house 18 months later. Charlie’s job took the family to Gueydan, LA in 1959. Their son, Curt, was born shortly after. She returned to college in Lafayette, LA to work towards her teaching degree. The family moved again to Thibodaux, LA in 1967. Bobbie began her teaching career there while completing her degree at Nicholls State University, earning her degree in 1970. She went on to receive her Masters Degree at Nicholls, graduating in 1974 at the same ceremony as her son-in-law. She later earned her +30 hour certification. She taught at Raceland Elementary School, St. Charles Elementary, and Bayou Blue Elementary. Bobbie & Charlie moved again to Mobile, AL in 1976. Bobbie completed her career teaching at Dixon Elementary School and Meadowlake Elementary School in Mobile County. Her great loves in life were spending time with her three grandchildren and three great-grandchildren, and her dog fur babies. Her hobbies included LSU & Saints football, NASCAR, going to the beach, reading, playing cards, making her own greeting cards, and working puzzles. Bobbie was preceded in death by her parents, Byron & Dorothea O’Neal; husband, Charles “Charlie” Newhouse; daughter, Linda Kay Newhouse; and sister, Jacquelyn Byrd. Bobbie is survived by her daughter, Brenda (Bill) Bush of Fort Worth, TX; son, Charles “Curt” (Flori) Newhouse of Bucharest, Romania; grandchildren, Mandy Graves, Brent Bush, and Bella Newhouse; three great-grandchildren, Lizzie Bush, Khloe Graves, and Kody Graves; other relatives, and friends. Visitation will be held on Saturday, April 2, 2022 from 10-11 AM at Serenity Funeral Home, 8691 Old Pascagoula Rd in Theodore, AL 36582, followed by service at 11 AM. Interment will be held in Serenity Memorial Gardens. In lieu of flowers, please consider a donation in Bobbie’s memory to Alzheimer’s Association, the Salvation Army, or Schluter Elementary library (1220 Mesa Crest Dr, Haslet, TX 76052).

The family of Barbara O'Neal Newhouse created this Life Tributes page to make it easy to share your memories.

Send flowers to the Newhouse family.