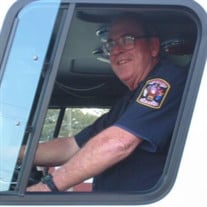 William Melton Wilkinson Jr, age 74, resident of Summerdale, AL and longtime native of Mobile, AL was called home on Monday, May 10, 2021. William was born April 9, 1947 in Mobile, Alabama. He served his country in the United States Air Force during Vietnam. He spent his career as a Mobile firefighter for 33 years serving the city. He was known to his fellow firefighters as 'Mama Wilkie,' for the fact he always watched out for them. William also spent 30 years working in the parks department for the city at Ladd Peebles Stadium in his off days from the fire department. William is preceded in death by his father, William Melton Wilkinson, Sr.; mother, Artie Mae Wilkinson; sister, Cynthia Shaw; and son, Michael Wayne Wilkinson. His memory lives on by his wife, Patsy Salter; son, Daniel Wilkinson (Dannan); step-sons, Brian Salter, David Salter (Wynona), and Howard Salter; as well as several grandchildren and great-grandchildren. A visitation for William will be held Saturday, May 15, 2021 at 10:00 AM at Serenity Funeral Home, 8691 Old Pascagoula Road, Theodore, Alabama 36582 followed by a funeral service at 12:00 PM, lead by Pastor Dennis Shaw. Interment will be held in Serenity Memorial Gardens.

The family of William Melton Wilkinson Jr. created this Life Tributes page to make it easy to share your memories.

Send flowers to the Wilkinson family.