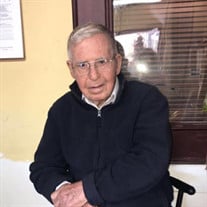 On Thursday, August 26, 2021, William Morris Otto, loving husband, father, Papa, and eldest of a 5-generation family, passed away at home surrounded by loved ones at the age of 97. William was born January 25, 1924 to Eugenia Otto Williams and... View Obituary & Service Information

The family of William Morris Otto created this Life Tributes page to make it easy to share your memories.

Send flowers to the Otto family.