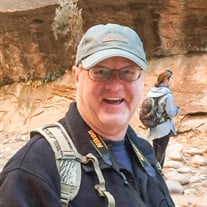 William Ural Klutz (known by friends and family as Bill), of Mobile, Alabama, passed away peacefully on September 3, 2021 at 66 years old. He was born January 12th, 1955 in Asheville, North Carolina, but was a longtime resident of Mobile. He received his Bachelor of Sciences in Biology from the University of North Carolina: Chapel Hill in 1977 and his Bachelor of Sciences in Chemical Engineering from the University of South Alabama in 1983. His love for learning extended throughout his life. He worked at Evonik Industries for the majority of his career as an Environmental Compliance and Reporting Manager for North America. Prior to his accomplishments at Evonik, he worked for several years with the Environmental Protection Agency as a hazardous waste contamination expert. Bill loved adventure: recording hundreds of skydives, hiking the Appalachian Trail, and ziplining in the Smokies, were a few of his favorite life experiences. In his free time, he also enjoyed restoring his 1969 Roadrunner, riding his motorcycle, hunting, fishing, shooting, and playing card games at the tables in Biloxi. Although Bill was made as tough as they come, those who knew him well were familiar with his softer side too. He was often moved by the simple beauty in life and made a point to slow down and be grateful for the blessings surrounding him. There was never a problem that was too big for him to solve, and those he loved knew that he was just a phone call away whenever they needed him. He was a devoted husband to his wife, Brenda, with whom he shared love and life with for 38 years. He cherished time spent with his family above all else. Although he went by Bill, he was most proud to be called Dad, Pawpaw, and Honey. He was preceded in his death by his mother, Ruth Shroat Klutz; and his grandmother, Bessie Lewis Shroat. Bill is survived by his wife, Brenda Massaro Klutz; children, Susan Onderdonk, John (Candy) Massaro, and Rachael (Ethan) Olson; three grandchildren, Reid (13), Nora (2), and Jack (9 months); brothers, Ken (Debbie) Klutz and Tony (Angie) Klutz; nieces, Laura, Katie, and Savannah; other relatives, and many friends. His family is devastated by his absence, and the void he leaves will never be filled. There will be a visitation held on Sunday, September 12, 2021 at Serenity Funeral Home at 8691 Old Pascagoula Road, Theodore, Alabama 36582 at 1:00 PM, followed by a memorial service at 2:00 PM. All those wishing to pay their respects and share their memories are invited to attend. In lieu of flowers, contributions in memory of Bill can be made to The Leukemia & Lymphoma Society.

William Ural Klutz (known by friends and family as Bill), of Mobile, Alabama, passed away peacefully on September 3, 2021 at 66 years old. He was born January 12th, 1955 in Asheville, North Carolina, but was a longtime resident of Mobile. He... View Obituary & Service Information

The family of William Ural Klutz created this Life Tributes page to make it easy to share your memories.

William Ural Klutz (known by friends and family as Bill), of...

Send flowers to the Klutz family.