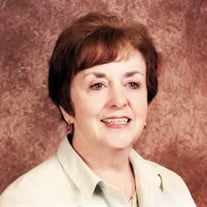 Vivian Leigh Pirkle, affectionately known by friends and family as “Vivie”, departed from this earthly life and entered through the gates of Heaven on Thursday, May 27th, 2021. She was 80 years young when she passed. Vivie was born on March 13, 1941 in Atlanta, Georgia. She was preceded in death by her parents, John H. Pirkle and Dorothy Robbs Pirkle; and her brother, John T. “Johnny” Pirkle. Vivie is survived by her three sisters, Elaine Pirkle, Nancy (Don) Murphey, and Sue Pirkle Howell; two sons; Richard Todd Edmond (Tina) and John Jacob “Jake” Edmond (Shana), ex-daughter-in-law and special family member, Christina Edmond; six grandchildren, Caleb, Megan, Sam, Charlotte, Britiny, and Jason; as well as a number of nieces and nephews who love her dearly. Vivian attended school in Atlanta, GA, and graduated from Sylvan Hills High School in 1959. She attended Truett-Mcconnell College, in Cleveland, GA, where she earned her Associate Degree, as well as Belmont College, in Nashville, TN, where she obtained her Bachelor’s Degree. She received her Master’s Degree from the University of South Alabama, in Mobile, AL; and finally, obtained her Education Specialist Degree in School Counseling from West Georgia College in Carrollton, GA. Vivie taught school for 11 years at Mobile Christian School in Mobile, AL, and later moved back “home” to Cumming, GA, where she was then employed as a counselor at North Forsyth Middle School for 18 years. After 29 years of being a part of the education system, Vivie retired and once again moved back to Alabama. She lived out the remainder of her life in Foley, Alabama. Vivian attended the First Baptist Church of Foley, Alabama, and truly enjoyed being a part of her church family. Vivie also loved to travel with her sisters, as well as with her church group, and she never shied away from a new adventure. Vivie did not simply make acquaintances, but instead made life-long friends. She was beloved by past teachers and students alike, and made an impact on everyone she met. Vivie was named “Woman of the Year” by Forsyth County in 1994, and was a volunteer for the opening and closing ceremonies for the 1996 Olympics in Atlanta, GA. She was a faithful giver and supporter of The Parkinson’s Foundation, St. Jude Children’s Research Hospital, and the Alabama Sheriff’s Boy’s Ranch. Giving back was her nature, and she left every situation better than she found it any time she was able. Vivian was a blessing to all, and she will be deeply missed by those she has left behind. Vivian is at peace now in her eternal home, and undoubtedly receiving the many treasures that she has laid up in Heaven; we know that she will one day greet us again with open arms. Visitation and Funeral Services will be conducted at Ingram Funeral Home in Cumming, Georgia. Visitation will be on Tuesday, June 1, from 5:00 PM – 7:00 PM; and the funeral will be held on Wednesday, June 2, at 1:00 PM. Interment will follow at the Concord Baptist Church Cemetery, also in Cumming, Georgia.

Vivian Leigh Pirkle, affectionately known by friends and family as &#8220;Vivie&#8221;, departed from this earthly life and entered through the gates of Heaven on Thursday, May 27th, 2021. She was 80 years young when she passed. Vivie was... View Obituary & Service Information

The family of Vivian Leigh Pirkle created this Life Tributes page to make it easy to share your memories.

Send flowers to the Pirkle family.