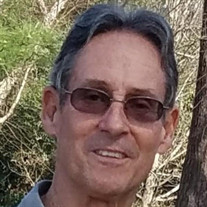 Timothy Lee Freeman passed away on June 15, 2022, at the age of 66, in his home in Mobile, AL. He was born on October 4, 1955 to Lum Freeman and Matilda H. Freeman. Tim married his wife, Betty Delaney, on March 18, 1977. They had two children, Autumn and Justin "Shane." He was a business owner of JaniKing, and, with his brother, Mike Freeman, a construction company. He enjoyed fishing; if he was not working, he and Betty were out fishing. Tim never met a stranger. He loved to talk about his favorite fishing spots, his latest catch, and wanted to know where he could catch the next big one. He was always ready with a tool when someone was in need. He loved his family and friends and wanted to be around them as much as possible. He was born in a large family and married into an even larger one. He is survived by his wife, Betty Delaney Freeman; children, Autumn Demeranville (Ryan) and Justin Shane Freeman; grandchildren, Christian Isaiah Whitten and Felicity Carol Demeranville; brother, Mike A. Freeman (Brenda); sisters, Mona “Susie” M. Bond, Linda Kervin (James), and Cinda Freeman; brother-in-law, Michael Delaney; sisters-in-law, Mary Cromer (Danny) and Shelia McCall; many nieces and nephews; other relatives, and friends. He is preceded in death by his brother, Gary P. Freeman; brothers-in-law, Van Lynn Delaney, James Delaney (Toni Delaney Sweet), and Larry K. Delaney. They are now reunited in Heaven. Vistation will be held on Thursday, June 23, 2022 from 10 AM-12 PM, followed by service at 12 PM. Interment will be held in Serenity Memorial Gardens.

The family of Timothy Lee Freeman created this Life Tributes page to make it easy to share your memories.

Send flowers to the Freeman family.