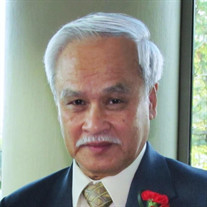 Mr. Nguyễn Ngọc Sao, age 75, from Mobile, AL returned to his heavenly home on April 29, 2022. He was the youngest of five children born on August 11, 1946 to Mr. Nguyễn Ngọc Lối and Mrs. Trương thị Màng in Lái Thiêu, Việt Nam. He was preceded in death by his parents and his oldest brother, Hoa ngọc Nguyễn. He is survived by his son, Luan (Kelly) Nguyen; daughters, Jacqueline Ngoc (Ryan) Howard and Sheila Nguyen Overstreet; grandchildren, Charlotte and Olivia Nguyen; Thai, Lucy and Rosalie Howard; and Nolan and Luca Overstreet; siblings: Nguyễn thị Tốt, Nguyễn thị Đẹp; and host of nieces, nephews, cousins, and many friends he considered family both in Vietnam, Europe, and America. After graduating from high school in VN, he studied English to be a translator at the American-Vietnamese Association in Saigon and was certified as a professional translator. After that, Mr. Sao was selected to be trained as a reserve infantry officer at the Thủ Đức Military Academy. He graduated in 1970 and specialized in military base management with the rank of Warrant Lieutenant. His first base was in Phú Giáo. At this base he was promoted to Second Lieutenant and then to First Lieutenant. In 1972, he was assigned as Base Commandant in Binh Duong, his hometown, where he was promoted to Captain. He was married in 1974. After South Vietnam fell to the Communists in 1975, along with hundreds of thousands of former military officers, he was imprisoned several times in re-education camps. In 1981, he, his wife, and his 2 year-old son, left Vietnam as boat people. His boat was rescued by an American Navy ship from the 7th Fleet, the USS Thomaston, and transferred to the refugee camp in Singapore. With his leadership skills and fluent English, he was appointed as the refugee camp’s leader until he settled in Florida in 1982. Over the years, he had two beautiful daughters. He and his family have resided in Mobile since 1984. He was very loved and well regarded in Mobile’s Vietnamese community from operating several businesses and being a well-known leader in the Vietnamese Senior Association for years. Mr. Sao Nguyen was a devoted father and grandfather who always loved and cherished his family. He gave his children pride in the family’s heritage and left great virtues for future descendants through his legacy of good deeds and achievements. He was also a fun and compassionate individual. He loved music, collecting art, teaching and sharing his knowledge with everyone he met. Wherever he went, there was big laughter, incredible stories and lots of warmth. He was greatly loved and will be missed by all who knew him. Visitation will be held at Life Church on Saturday, May 14, 2022 from 3-4 Pm, followed by service at 4 PM.

The family of Sao Ngoc Nguyen created this Life Tributes page to make it easy to share your memories.

Send flowers to the Nguyen family.