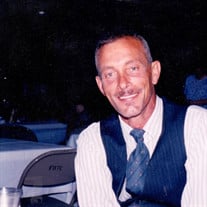 Ronald M. Howell passed away at home with his loving wife Mary by his side. He was an avid fisherman on the recreational fishing boat, the Reel Dream. He was an Insulator for Huntington/Ingalls 22 years, a master plumber for 20 years and a union... View Obituary & Service Information

The family of Ronald Mitchell Howell created this Life Tributes page to make it easy to share your memories.

Ronald M. Howell passed away at home with his loving wife Mary...

Send flowers to the Howell family.