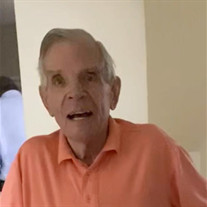 Robert Norman Scott, Sr. age 84, of Mobile, died May 9, 2021. Bob was born in Jackson, MS, on June 17, 1936, graduated from Dothan High School, and received his degree in Civil Engineering from Auburn University in 1961. He also served in the U.S. Marine Corps Reserves from 1957-1963. Bob was a former member of Grace Lutheran Church where he sang in the choir and served as an usher. Bob coached many of his sons’ ball teams, led them in Cub Scouts, and was a member of the Civitan Club. Bob was a die-hard Auburn football fan, as well as a fitness enthusiast, and long-time member of the Mobile YMCA, where he enjoyed strength training and indoor biking. Bob worked for Palmer and Baker Engineers, Ewin Engineering, and David Volkert and Associates, where he served as Assistant-Secretary Treasurer. He belonged to the American Society of Civil Engineers and served as an officer. He retired from the U.S. Army Corps of Engineers and worked for several years at the base in Wiesbaden, Germany. He loved skiing in the Alps and traveling throughout Europe. He is survived by his wife, Phyllis Scott; sister, Sandra Helsel; sons, Robert Norman Scott, Jr., Richard Alan Scott, and Andrew Douglas Scott; daughter, Edith Davis Scott; step-sons, Michael Chapman, Bradley Chapman, and Joseph Chapman; step-daughters, Andrea Berg and Leslie Wilkins; and multiple grandchildren and great-grandchildren. Bob is preceded in death by his parents, Harry Norman Scott and Edith Boswell Scott; brother, Richard Boswell Scott; granddaughter, Sula Davis Barry; and step-daughter, Patricia Chapman Clarke. Our family is especially grateful to caregivers, Latreace Stephens and Barbara Jones. A private, family service officiated by the Reverend Dr. Sterling Boykin of Ashland Place Methodist Church, was held May 18, 2021, at Mobile Memorial Gardens.

Robert Norman Scott, Sr. age 84, of Mobile, died May 9, 2021. Bob was born in Jackson, MS, on June 17, 1936, graduated from Dothan High School, and received his degree in Civil Engineering from Auburn University in 1961. He also served in the... View Obituary & Service Information

The family of Robert Norman Scott created this Life Tributes page to make it easy to share your memories.

Send flowers to the Scott family.