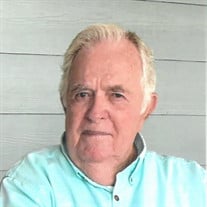 Robert Douglas "Doug" Bartlett went to his eternal reward Sunday, March 27, 2022. He was born in Range, Alabama on August 7, 1938 to Allie Mae Johnson Clark and Charles Allen Bartlett, both deceased. Doug was a graduate of Baker High School, Class of 1956. He attended Southeastern Bible College from 1957-1958. He was preceded in death by his parents; and siblings, William (Bill) Bartlett, Charles Bartlett, Ruth Petrantis, and Betty Joyner. He is survived by his wife of 60 years, Louise Busby Bartlett; children, Lanetta Goff (Darnell), Russell Bartlett (Belinda), and Starla Bartlett; grandchildren, Brittany Bartlett Felps (Oso), Dusten Bartlett, Dalton Bartlett, Garrett Goff (Pamela), Michaela Goff, and Wyatt Booker; great-grandchildren, Caleb Chhum, Averie Chhum, David Bartlett, Yanna Chhum, Kyler Autrey, and Harley Autrey; sister, Dorothy Lawrence; along with many nieces, nephews, cousins, numerous other relatives, and beloved friends. Doug was a talented musician and writer. He pastored churches in Alabama and Florida as well as being a first-class brick contractor. After retiring, he did consulting work. His last pastorate was Evangel Temple Assembly of God in Theodore, Alabama where he did service at for 40 years. Doug has written many songs and wrote music for other people's songs. He has published 4 books and really enjoyed writing stories for his children and grandchildren. Doug was loved and respected by everyone he met. He was the same in the community as he was in the pulpit. He will be truly missed. Visitation will be held on Thursday, March 31, 2022 from 5-8 PM at Evangel Temple Assembly of God. Funeral service will also be held there on Friday, April 1, 2022 at 1 PM. Interment will be held in Serenity Memorial Gardens.

The family of Robert Douglas Bartlett created this Life Tributes page to make it easy to share your memories.

Send flowers to the Bartlett family.