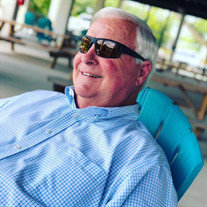 Mr. RL Watson, age 74 of Grand Bay, AL passed away on Sunday, August 29, 2021. He was born January 29, 1947 in Philadelphia, MS. RL is survived by his wife of 54 years, Lynda Watson; sons, Todd (Christie) Watson of Tuscaloosa, AL, and David (Janea) Watson of Foley, AL; daughter, Kimberly (Rod) Stokes of Grand Bay, AL; granddaughters, LeighAshton (Seth) Nuss, Micah Watson, Reylee Watson, and Reygan Watson; and many others to whom he was PawPaw. A 1965 graduate of Vigor High School, RL played football, basketball, and baseball. He was awarded an athletic scholarship to Livingston University (currently University of West Alabama) where he played football and baseball and earned his Bachelor's Degree in Secondary Education. He earned his Master’s Degree from the University of South Alabama and his Educational Specialist Degree from Alabama State University. RL was inducted in the Baldwin County Varsity Coaches Association Hall of Fame in 2008. He was awarded the Alabama High School Athletic Association Lifetime Achievement Award in 2015 for his longevity in education. He was to be inducted into the Baldwin County High School Hall of Fame in September, 2021. Known in the community as both Coach Watson and Mr. Watson, RL spent 52 years of his life coaching and teaching both students and adults. He was a longtime high school football coach in various schools in Alabama but most notably at Alba High School (Bayou La Batre) from 1979-1988, and Baldwin County High School (Bay Minette) from 1988-1993. He retired from coaching and became a principal at Scarborough Middle School (Mobile), Alma Bryant High School (Irvington), and East Central Middle School (Hurley, MS). After retirement from both Alabama and Mississippi, his love for education was still evident as he became a favored substitute teacher by principals, teachers, and students. He looked forward to getting the requests to sub and to continue his relationships with everyone in the schools. Education was truly his calling. He was proud of his family and instilled his loved of education in his children and grandchildren. One son is a coach, the other a principal; his daughter is a counselor; both daughters-in-law are teachers; and his granddaughters are either already teachers or are planning to teach. They learned from the best! Being the best husband, dad, and PawPaw was a natural gift for RL. He loved spending time with his family! His newfound love of lake life became a hobby in the spring and summer; and of course, football and holidays consumed the fall and winter. He also enjoyed woodworking and building furniture for the family. He was so loved and will be sorely missed! Visitation will be held on Sunday, Sept 5, 2021 from 3-5 PM at Forward Church, 11960 Argyle Road in Irvington, AL with service to follow at 5 PM. A graveside service will be held Tuesday, Sept 7, 2021 at 10 AM in Serenity Memorial Gardens. Flowers are welcome or donations can be made in RL Watson's memory to: Alma Bryant High School Booster Club PO Box 346 Irvington, AL 36544 Attn: RL Watson Memorial Fund PayPal.me/abhsfootballboosters

The family of RL Watson created this Life Tributes page to make it easy to share your memories.

Send flowers to the Watson family.