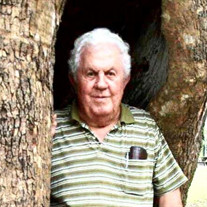 Richard Hasting Puckett was an incredibly caring husband, father, grandfather, great-grandfather, brother, and friend. He passed away on November 14, 2021 at age 83 after a courageous battle with COVID-19. He was born to Joseph and Dorothy Puckett on October 9, 1938. He was married to his wife, Sherry, for 64 years. Together, they had four children, Theresa, Richard “Buddy,” Kimberly, and Jessica. He was also very close to niece and nephew, Rebekah and Gary, who shared his passion for plants. He was a loving husband and was the kind of man that supported his loved ones in any way he could. He would often say after dinner, “Leave those for the dishwasher.” He would wake up, drink his cup of coffee, and wash the dishes before anyone else was out of bed. He and his wife met when they were both just teenagers. One of his earliest professions was being a truck driver where he and his wife often traveled together to every corner of the country. He could tell you the route to any city from coast to coast. He was resilient, adaptable, and hardworking. He did everything from running a fruit stand, bartending, carpentry, and truck driving. Richard was a go-getter and did not believe in idle hands; unless it was for his “cowboy nap” followed by his coffee and afternoon sweet. Maybe it was all the apple fritters that made him such a sweet and caring man, but it more likely just his nature. Like his mother, known as “Mama Dot” to most, he was most in his element nurturing his garden. He also enjoyed tinkering and working on anything that needed fixing. He could see potential where others could not. This led to his hobby for “junking.” He could take any hunk of junk and find a way to make it into something that worked for him. He saw the best in people as well, and would try to lend a hand anytime he could. The quickest and surest way to make him smile was seeing a baby and trying to make them laugh. He was a proud grandfather to Breck, Matt, Josh, Lucy, Brandi, Brittney, Ashley, Darrell, Rebecca, and Stella and great-grandfather to 12 great-grandchildren. He is preceded in death by his mother and father, Dorothy and Alton; and siblings, Harry “Joe,” Robert, and Jimmy. He will be sorely missed and survived by his wife, Sherry; children, Theresa, Richard “Buddy,” Kimberly, Jessica; grandchildren, Breck, Matt, Josh, Lucy, Brandi, Brittney, Ashley, Darrell, Rebecca, and Stella; 12 great-grandchildren; siblings, Nina “Sissy,” Terry, Margaret, Adell, JoAnn; nieces, nephews, other relatives, and many friends. Visitation will be held on Friday, November 19, 2021 from 12-2 PM at Serenity Funeral Home, followed by service at 2 PM. Interment will be held in Serenity Memorial Gardens.

Richard Hasting Puckett was an incredibly caring husband, father, grandfather, great-grandfather, brother, and friend. He passed away on November 14, 2021 at age 83 after a courageous battle with COVID-19. He was born to Joseph and Dorothy... View Obituary & Service Information

The family of Richard Hasting Puckett created this Life Tributes page to make it easy to share your memories.

Send flowers to the Puckett family.