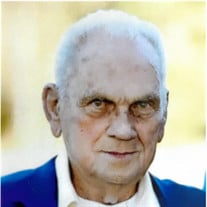 Norwood Oliver "Toby" Cain was born January 21, 1930 to Vance Stilver and Inez Sullivan Cain. On July 8, 2021, at the age of 91, he went home to be with our Heavenly Father. He is preceded in death by his wife of 63 years, Corrine Johnson Cain; granddaughter, Sarah McGuff; grandson, Lance Tillman; daughter-in-law, Sandra Cain; and brothers, Stilver Cain and Neil Cain. He is survived by his four children, Gail (Stephen) LaForce, Norwood "Bubba" (Renee) Cain, Lana (Dennis) McGuff, and Tommy (Stephanie Bosarge) Cain; grandchildren, Keith (Martha) LaForce, Sandy (Chad) Graham, Ashley (Chase) Norris, Malise (Robert) Frush, Wendy (Jason) Cornelius, Jeremy (April) McGuff, Lora (Alton) Knight, Dale (Ashlee Collier) Cain, Elizabeth (James) Endres, Crystal McGuff, Justin (Megan) Cain, Stephen McGuff, Joseph (Meagan) Cain, Rachel (Cory) Seaman, and Katie (Ben) Brinkman; 32 great-grandchildren; 5 great-great-grandchildren; sister, Janet (Lamar) Stork; nieces, nephews, other relatives, and many friends. Toby was a true man of the sea. At age 16 he enlisted in the Merchant Marines and sailed around the world. After marrying his wife, Corrine, he began a 50-year commercial fishing career. In 1965 the two founded Water Front Seafood. 56 years later and 3 generations of owners, Water Front is known for some of the best blue crab meat on the Gulf Coast. Yet, this wasn't Toby's greatest achievement. His greatest legacy was his children and grandchildren. Toby taught his family the value of hard work and dedication. Leading by example, he taught us to have pride in our work ethic. He continued to work every day until his 91st birthday. Known affectionately to all as "Papa," he was beloved by family, employees, and members of the community. His impact on us is immeasurable. We are eternally grateful to have been blessed with such a wonderful father and grandfather, and a true example of what a man should be! How proud and honored we are to call him Daddy and Papa! Praise be to God that he also left us a testimony of his salvation. Because of this we know he is with our Lord and Savior, Jesus Christ, and we will one day see him again in Heaven. Pall bearers are Keith LaForce, Dale Cain, Jeremy McGuff, Justin Cain, Joseph Cain, and Troy McBride, Jr. Honorary pall bearers are Claude Fair, Roun Jan, and Nok Voeun. Toby will be waked at Lighthouse of Hope on Argyle Road in Irvington on Monday, July 12, 2021 at 5 PM. His funeral services will be Tuesday, July 13, 2021 at 10 AM, also at Lighthouse of Hope, service starting at 11 AM. Interment will follow at Oddfellows Cemetery.

Norwood Oliver "Toby" Cain was born January 21, 1930 to Vance Stilver and Inez Sullivan Cain. On July 8, 2021, at the age of 91, he went home to be with our Heavenly Father. He is preceded in death by his wife of 63 years, Corrine Johnson... View Obituary & Service Information

The family of Norwood Oliver Cain created this Life Tributes page to make it easy to share your memories.

Send flowers to the Cain family.