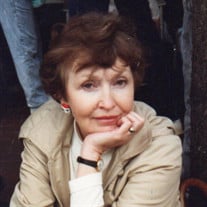 Maida Jean Dunn Crabtree, born February 15, 1937, a resident of Ocean Springs, MS, passed away on September 23, 2021. She was preceded in death by her husband, Robert Odell Crabtree, Sr.; brother, William E. Dunn; sisters, Janice Etchison and Phyllis Goodridge; and brother-in-law, William M. Crabtree (Jean). Left to cherish her memory are her children, Robert Odell Crabtree, Jr., Sharon Crabtree McMahan (Charles Scott), and Keith Jeffrey Crabtree; grandchildren, Zoë Adelle McMahan and Rowen Scott McMahan; brother, Elwyn L. Dunn; sisters-in-law, Clara B. Johns and Celia Dunn; brother-in-law, Donald Johns; nephews, Donald Johns, Jr., William Gregory Dunn (Rachel), Stephen Paul Dunn, and Aaron Goodridge; niece, Laura Lee McLeod (Jason); other relatives, and friends. Maida was born in Mobile, AL to William A. Dunn and Lema C. Dunn. She was a graduate of Baker High School in 1955 and began work at the phone company where she met Robert. Rob joined the Air Force which began decades of travel for Maida and her family. This love of travel continued after his passing, until just a few short years ago. She was able to put a foot down on almost every continent. After Rob retired from the Air Force and the family settled in Mississippi, Maida began work at St. Martin East Elementary School where she helped shape many a young life. She enjoyed working with the teachers and staff but especially loved working with all the students. Upon retirement, Maida put family first. She spent time with her children, grandchildren, and siblings up until her passing. Until her health became an issue, she would frequent the musicals, plays, and sporting events to watch her precious grandchildren. Seeing them was one of her greatest joys. Maida was an avid reader, collected elephants, enjoyed all British television, and would debate you on the finer points of her political beliefs, if she felt you needed a quick lesson. However, there would be a smile and a laugh to soften her comments. Although Maida's health began to deteriorate due to heart issues and the complications associated with them, she was always ready with a bright smile and a kind word. Her manners were impeccable and it was rare to not receive a compliment. Those habits continued through her final days. She was truly an inspiration; the true definition of a lady. Maida was fiercely independent and the last months of her life caused a mental battle she had to fight daily because she did not want to be a burden to her loved ones. She was thankful every day and we were thankful for her. There will be a visitation on Thursday, October 14, 2021 from 10-11 AM at Serenity Funeral Home on Old Pascagoula Rd in Theodore, AL, followed by service at 11 AM. A celebration of life will immediately follow at the Serenity Event Center from 12-3 PM.

The family of Maida Jean Crabtree created this Life Tributes page to make it easy to share your memories.

Send flowers to the Crabtree family.