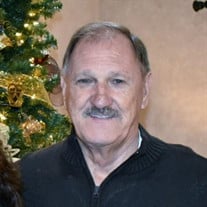 Lamar Samuel Taylor, age 81, a resident of Mobile, AL, passed away Monday, February 7, 2022 surrounded by loved ones. Lamar was born in Brewton, AL on September, 25, 1940. He retired in 1999 after 34 years from Kimberly Clark. Lamar was... View Obituary & Service Information

The family of Lamar Samuel Taylor created this Life Tributes page to make it easy to share your memories.

Send flowers to the Taylor family.