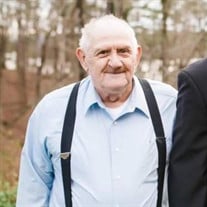 Joseph Woodrow Felix Jr., age 78, a longtime resident of Coden, AL passed away June 12, 2021. Joe was born November 23, 1942 to Joseph W. Felix, Sr. and Velda “Pat” Felix in the Croyle Township, (Sidman) PA. Upon completion of high school, he joined the United States Air Force. He was initially stationed in Biloxi, MS and was then sent to the Air Force Base on Dauphin Island to work on the radar station. This was often a family joke, since he volunteered for overseas duty and Dauphin Island was as far as he got. There he met Hilda and after two years of dating, they were married. He was honorably discharged from the Air Force and moved his new bride back to his home state of Pennsylvania. After eight years, they, with their three children, returned to Alabama. Joe worked as an electrician at Ingalls Shipyard for many years. When the new lift bridge was built in the bayou he worked with the company who had the contract. When the bridge was completed he took a job with the State of Alabama Highway Dept and ran the lift bridge for several years. He then transferred to the tunnels in Mobile and continued to work with the state. He retired after 25 years. Joe never met a stranger and always had a story or two or ten to share. He and his stories will be greatly missed by all who knew and loved him. He was preceded in death by his beloved wife of almost 50 years, Hilda L. (Sprinkle) Felix; parents, Joseph and Velda "Pat" Felix; sister, Dorothy Friedman. He is survived by his children, Terry (Liz) Felix, Kelly (Jeff) Pettit, and Jerry (Candice) Felix; grandchildren, Jackie (Ray) Felix, James (Jordan) Florkiewicz, Amanda (Daniel) Felix, and Laura (Matthew) McDonald; step-grandchildren, Kayla (Jonathan) Lupton and Austin Pettit; great-grandchildren, Owen, Vivienne, and Jon Emerson; brother, Robert (Carol) Felix; beloved companion and pet, Nelson; and many in-laws, nieces, nephews, cousins and friends. A visitation will be held on Saturday, June 19, 2021 from 10 am-12 pm at Serenity Funeral Home with funeral service to follow at 12 pm. Internment will be held in Oddfellows Cemetery.

The family of Joseph Woodrow Felix Jr. created this Life Tributes page to make it easy to share your memories.

Send flowers to the Felix family.