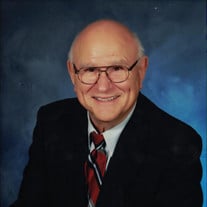 Dr. John Mack Welford, age 81, completed his life’s work on Monday, September 27, 2021 and joined his family in heaven. Mack was born in Mobile, Alabama. He grew up in Grand Bay, Alabama and graduated from Mobile County High School. A former classmate said that he was the glue that held their entire class together as they met almost annually since graduation. He attended the University of Alabama for his undergraduate degree and the University of Virginia for his Masters and Doctoral degrees. Mack dedicated his life work to the education of future teachers at Roanoke College for 42 years. Although he was dedicated to the future, he was committed and passionate about his past through genealogy. He spent incalculable hours tracing his family tree. His daughters remember the hours they spent waiting outside churches, cemeteries, and courthouses as he investigated the past in order to pass on this information to his family. He served the Lord here on earth at home, church, and in the community. He taught by example the qualities that he wanted to pass to his children and grandchildren. In the church, he lifted up, supported, and comforted members of his church as a former deacon, Sunday School teacher and active member at Salem Baptist Church. In the community, he was a champion for his students, and a member of the former Salem and Charlottesville Jaycees. He was always up for an adventure and even served as a National Park Ranger in his 70s. He was serious about his duties as a son, brother, husband, and father but he was known by his friends as charismatic, loyal, and a prankster. People were drawn to his humor, wit, and sarcasm. He was a talented musician, playing the saxophone early in life and the piano throughout his life. He was a voracious reader and seemed to permanently catalog everything he ever read. He was a detailed historian and dramatic storyteller. His ability to recall the smallest details kept listeners engaged. Friends and family will miss this the most. The family has solace in knowing that he was active, except for a few days, with travel, spending time with family, and gardening until the end of his days. His earthly departure leaves a void in our lives that could never be matched by another. As a longtime colleague expressed, “There can only be one Mack Welford.” Mack is survived by his wife of 56 years, Nettie Alice (Huffman); and three daughters, Beth Poff of Salem, VA, Julie Greenhill of Charlottesville, VA, and Catherine Varney (Nick) of Charlottesville, VA; five grandsons, Taylor, Braden, Afton, John Mason, and Charlie; brother, Calvin (Judy) of Grand Bay, AL; and other numerous extended family members. He was preceded in death by his mother, Lizzie Mae; father, John C.; and brother, Alvin, all of Mobile, Alabama. The family received friends at Salem Baptist Church on Friday, October 1, 2021 from 11:00 until 12:00 pm. The funeral followed the visitation at the church. A private burial was held in Roberts Chapel United Methodist Church Cemetery in Mobile, Alabama. A memorial service will be held at a later date in Alabama.

Dr. John Mack Welford, age 81, completed his life&#8217;s work on Monday, September 27, 2021 and joined his family in heaven. Mack was born in Mobile, Alabama. He grew up in Grand Bay, Alabama and graduated from Mobile County High School. A... View Obituary & Service Information

The family of John Mack Welford created this Life Tributes page to make it easy to share your memories.

Send flowers to the Welford family.