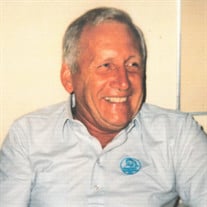 John Porter Tillman, age 91, who was born in Bayou la Batre, AL and was a resident of Fowl River for the last 35 years, passed away July 25, 2021. He is survived by his wife, Mary Williams Tillman; daughter, Robin Raines (Michael Raines); son, Marcus Tillman (Gail Tillman); bonus children, Mark Clark (Didi Clark-deceased) Sean Clark (Glenda Pitts), and (Paula Clark Sibilia-deceased); grandchildren, Jackson Tillman and Noah Tillman; bonus grandchildren, Shannon Poiroux, Deana Jewell, Sarah Smith, Troy Russell, and Calvin Clark; bonus great-grandchildren, Riley Poiroux, Brystol Poiroux, and Zoey Russell; many loving nieces, nephews, other relatives, and many friends. He is preceded in death by his parents, Martin Edgar Tillman and Elizabeth Bertha Tillman; sisters, Wynona Tillman Gazzier, Edris Lucille Tillman Rosenbarger, and Ruth Naomi Tillman Downey; and brother, M. E. Tillman. Following his military service from 1948-1951, he went to Brookley Air Force base repairing airplanes for the armed services, which had him traveling around the globe to work on some of these aircraft and, in turn, gave him a great passion for airplanes, and the USA, in turn, giving him a passion in geography. Following the closure of Brookley Air Force base, in lieu of transfer, he took on a career in the seafood industry and found success and many friends. With his love for the Alabama Crimson Tide football team he tailgated in a motor home with his wife, Mary Tillman, across the United States with many other tailgating friends and fans for some of his fondest memories. In addition, Porter's other hobbies were boat riding and playing golf with all of his friends, which brought him a lot of enjoyment. Memorial services will be held Saturday, August 7, 2021 at 2:00 pm at the community of Christ Church in Bayou La Batre, AL - 13955 S. Wintzell Avenue, Bayou La Batre, AL 36509.

John Porter Tillman, age 91, who was born in Bayou la Batre, AL and was a resident of Fowl River for the last 35 years, passed away July 25, 2021. He is survived by his wife, Mary Williams Tillman; daughter, Robin Raines (Michael Raines); son,... View Obituary & Service Information

The family of John Porter Tillman created this Life Tributes page to make it easy to share your memories.

Send flowers to the Tillman family.