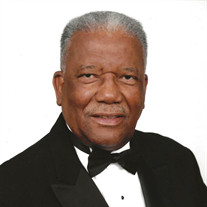 Jimmy “Jim” Knight, who lived a storied life with a servant’s heart, passed through this earthly life on the morning of Thursday, March 31, 2022. He was born February 21, 1939, in Finchburg, AL to the parentage of Mr. Duncan James Knight, Sr. and Mary Lubirda McCaskill Knight, who preceded him in death. Also preceding him in death were his daughter, Jessica Alice Knight; siblings, Pedro Knight, Mary Frances Thompson, Dr. Thomas “Ted” Knight, Sullivan Knight, Louis Knight, and Alvin Knight. The family moved to Mobile, AL in 1944 and resided in the area called Mobile Terrace. Jim was a 1959 graduate of St. Elmo High School. He attended Grambling College on a four-year Athletic Scholarship and graduated with a Bachelor of Science degree. He obtained his Master of Arts degree from the University of South Alabama and his Ed.S degree from Alabama State University. After graduating from Grambling, Jim enlisted and served honorably in the U.S. Army from 1964-1966. After returning to the City of Mobile, he began his professional career with the Mobile County Public School System. During this time, Jim became the first Driver Education Instructor for the Mobile County Public School System. After a successful beginning in the system, Jim became an Administrative Dean at B.C. Rain and Theodore High Schools, respectively. In 1979, he became the first African-American principal of a predominately white high school, Theodore High School. Jim accepted the position at the school during a time of racial unrest. He became a catalyst for integration and cultural diversity during his tenure at Theodore and throughout Mobile County. Because of Jim’s tenacity and dedication to excellence in education and athletics, he became Theodore High School’s most respected and admired principal in the school’s history. In 1989, the entire community honored Jim for his outstanding achievements, by naming Theodore’s newly-constructed gymnasium the “Jimmy Knight Gymnasium at Theodore High School.” Later the same year, Jim became the Assistant Superintendent of Student Services for the Mobile County Public School System. The branch of Student Services was the largest department within the Mobile County Public School System. After serving for five years as Assistant Superintendent, Jim discovered his calling as a humanitarian and a desire to work more closely with the community to help people and change lives. In 1995, Jim retired from the Mobile County Public School System and became the fifth Executive Director appointed at Mobile Community Action, Inc. (MCA) where he worked tirelessly until his retirement in 2013. Jim’s reign at MCA began during a tumultuous time for the Agency. Because of Jim’s exceptional leadership skills, dedication and perseverance, he restructured the entire Agency and developed a highly-effective organization. In recognition of his dedication and commitment to MCA, on September 21, 2013, the West Mobile Head Start Center was named the Jimmy Knight Head Start Center. Jim was active in his community. He has served on the Board of Directors for Mobile Works, the Senior Bowl Committee, Mobile Sports Hall of Fame, and the American Red Cross. He also served as a member of the Advisory Board for the University of South Alabama Department of Curriculum and Instruction, Mobile Chamber of Commerce, Alabama Citizens for Constitution Reform, Harlem Area Community Weed and Seed Steering Committee, Sickle Cell Association Foundation, 100 Black Men of Greater Mobile, Tillman’s Corner Chamber of Commerce, and the Prichard Chamber of Commerce. In 1987, Jim was named the Tillman’s Corner Chamber of Commerce’s “Citizen of the Year." He was honored with a photographic collage by the Black History Heritage Museum at Bishop State Community College. In 2010, Jim was the recipient of the City of Prichard’s Sports and Leadership Hall of Fame Award. Jim was a faithful and dedicated member of Ebenezer Baptist Church of Cottage Hill where he served as a Deacon, Adult Male Sunday School Teacher, and a member of the Male Chorus. He also orchestrated the Ebenezer Baptist Church Annul Blood Drive. He leaves to cherish his memories his wife of 55 years, Johnnie Mae Knight; daughter, Jimese Knight (Tobias) Britt of Helena, AL; son, Reverend Byron (Laura) Daniel of Mobile AL; grandchildren, Nashia Daniel, Jeromee Daniel, Byron Daniel II, Joshua Daniel, and Jacoby Daniel; brothers, John (Elouise) Knight of Columbus, OH, Duncan (Saundra) Knight of Citronelle, AL, Rudolph Knight, and Gene (Gloria) Knight of Mobile, AL; sisters, Leverne Daniels of Tuscaloosa, AL and Deborah (William) Dorsey of Atlanta, GA; sister-in-law, Juanita Knight of Mobile, AL; brother-in-law, Clay H. Bryant of Mobile, AL; nieces, nephews, great-nieces and nephews, and a host of other relatives and friends, including three devoted, Mr. & Mrs. Leroy Pettway and James Slone; as well as mentor, Hazel Fournier. Visitation will take place on Saturday, April 9, 2022, at 9:00-11:00 AM at Ebenezer Baptist Church of Cottage Hill, 5051 Ebenezer Drive, followed by service at 11 AM, with Rev. Dr. Rudolph Overstreet, officiating. Interment will be at Lawn Haven Memorial Gardens, 8691 Pascagoula Road, Theodore, AL.

The family of Jimmy Knight created this Life Tributes page to make it easy to share your memories.

Jimmy “Jim” Knight, who lived a storied life with a servant’s...

Send flowers to the Knight family.