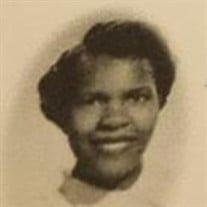 Jaunitta Irene (Jones) Cooper, age 88, was born on October 23,1932 in Mobile, AL to the late Sylvester Jones, Sr. and Leslie Irene Jones. She was a graduate of Lash High School in Zanesville, Ohio. She accepted Christ at an early age and devoted her life to serving God, family, and her neighbor. Jaunitta was joined in marriage to the late Presiding Elder Samson M. Cooper on November 23,1954, where they endured a journey of servant leadership. In the 3rd District African Methodist Episcopal Church, Sis. Cooper served as 1st Lady of various churches from 1956 to 2001 as follows: St. Andrews, Coshocton, OH; Grace, Bellefontaine, OH; Bethel, Scranton, PA; St. Paul, Pittsburgh, PA; Brown Chapel, Pittsburgh, PA; Young Chapel, Huntington, West VA; Park Place, Homestead, PA; Bethel, Pittsburgh, PA; and Payne Chapel, Duquesne, PA. She became 1st Lady of the Pittsburgh District of the Pittsburgh Annual Conference upon Rev. Cooper’s appointment to Presiding Elder from 2001 until 2007 retirement. Through the years, Sis. Cooper served the church and her community faithfully; a consummate servant leader. She hosted numerous local, district, and annual conferences, serving individuals from the streets to the White House, treating everyone with unconditional love and her unparalleled hospitality!! As a help meet, Mrs. Cooper was second-to-none in supporting her spouse wholeheartedly, easing the burden as he labored in the vineyard, and giving selflessly of her time and talents, while being an extraordinary homemaker, tirelessly balancing demands of motherhood for five children. She was the wind beneath their wings! In later years, she managed to serve in non-profit organizations, with over 17 years at The Salvation Army in Pittsburgh, PA until retiring and relocating to Louisiana and then Alabama. Mrs. Cooper received many accolades and embraced everyone she encountered with agape love. Full circle returning to her native Alabama, had family still here, made new friends, and joked about, “I’m living alone for the first time in my life and I’m loving every minute of it!” On August 18, 2021, she transitioned from this life to be in the presence of the Lord. She was also preceded in death by her sister, Cynthia Moon; brothers-in-law & sisters-in-law, Joseph Cooper, Lee Slaughter, Deola Jones, William & Aquila-Priscilla Hunt, and Allan & Beulah Henderson. Mrs. Jaunitta Irene Cooper leaves to cherish her memory, her children, Mr. Samuel Aaron, Ms. Demareus Naomi, and Mr. Samson Marcus Cooper, all of Pittsburgh, PA; devoted daughter, Mrs. Mary Rebecca Cooper-Ali of Satsuma, AL; devoted son and daughter-in-love, the Reverend Solomon Joseph and Dr. Robin LaJune Cooper of Huber Heights, OH; 7 grandchildren; 21 great-grandchildren; 7 siblings, Sylvester (Lois) Jones Jr. of CA, L. Robert (Sara) Jones of OH, Charles (Charlotte) Dickinson of IL, Leslie Lewis (Ida) of IL, Aubrey (Anita) Lewis of TN, Gloria Slaughter of AL, and brother, Lemuel Jones of Theodore, AL, whom joined her 12 days later to be by her side in the presence of the Lord; a special sister-in-law, Lillie Cooper of OH, and a host of nieces, nephews, cousins, other family members, and friends. Family and friends are invited to a visitation from 11:00 am-1:00 pm and Homegoing Service at 1:00 pm Thursday, September 9, 2021 at Serenity Funeral Home Chapel, 8691 Old Pascagoula Rd., Theodore, AL with Reverend Cleitis Walker, Sr. officiating. Interment will be held in Lawn Haven Memorial Gardens. Please wear a Mask and remember Social Distancing, thanks! For I am convinced that neither death, nor life, neither angels, nor demons, neither the present, nor the future, nor any powers, neither height, nor depth, nor anything else in all creation, will be able to separate us from the love of God that is in Christ Jesus our Lord. Romans 8:38-39 (NIV).

Jaunitta Irene (Jones) Cooper, age 88, was born on October 23,1932 in Mobile, AL to the late Sylvester Jones, Sr. and Leslie Irene Jones. She was a graduate of Lash High School in Zanesville, Ohio. She accepted Christ at an early age and devoted... View Obituary & Service Information

The family of Jaunitta Irene Cooper created this Life Tributes page to make it easy to share your memories.

Send flowers to the Cooper family.