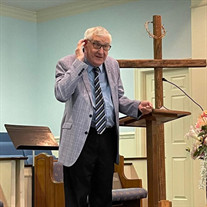 Rev. James E. Messer Sr., age 76, went to be with his Savior, Wednesday, October 6, 2021, surrounded by his wife of 54 years, Toby Davis Messer; and his three children, Jimmy Messer, Chris Messer, and Amanda Creel. He was known for being “a mess” living up to his last name in a big way, and his personality always seemed to join the room before he even arrived. His love of Jesus, his smile, and laughter, were always abundant and those who knew him described him as a consummate encourager, prayer warrior, and fisher of souls. As a young child, he overcame a lot of adversity: taking his first steps at the age of 3, prevailed over a speech impediment, and overcame hearing and vision issues to answer his call to preach. He graduated from William Carey College and Columbia High School (MS) and was constantly sharing the impact both had on him. However, his most prized accomplishment was being ordained to preach December 10, 1967, in his hometown church, First Baptist Church of Columbia. After being ordained he served as pastor of churches in Alabama, Louisiana, and Mississippi for more than 20 years before embarking on a journey as a full-time evangelist for 34 years. As an evangelist he was well-known throughout the south and preached in more than 20 different states, and two countries, India and Germany. In addition to his passion for spreading God’s message, he was a little fanatical about his Ole Miss Rebels, especially on the football field, and loved to brag about his home state of Mississippi. If you said Mississippi and failed to put your hand on your heart, he was sure to remind you, and if you said Ole Miss, you better start patting your chest. His love of life and unwavering work ethic will live on in his children. James was preceded in death by his parents, Henry Dezebual and Ruby Jordan Messer. James is survived by his wife, Toby Messer; sons, Jimmy Messer (April) and Chris Messer (Jeanne); daughter, Amanda Creel (Justin); seven grandchildren, Mallory Price (Boyd), Paul Messer, HolleyMaye Messer, Russ Messer, Avery Creel, Macy Messer, and Sawyer Creel; and numerous other family and friends. A visitation will be held Sunday, October 10, 2021 from 2:00–5:00 p.m. at Serenity Funeral Home, 8691 Old Pascagoula Road, Theodore, AL 36582. The celebration of life service will follow Monday, October 11 at 2:00 p.m. at First Baptist Church of Dawes, 3941 Dawes Road, Mobile, AL 36695. He will be laid to rest at Serenity Memorial Gardens. In lieu of flowers donations can be made to JEM Ministries or William Carey University.

Rev. James E. Messer Sr., age 76, went to be with his Savior, Wednesday, October 6, 2021, surrounded by his wife of 54 years, Toby Davis Messer; and his three children, Jimmy Messer, Chris Messer, and Amanda Creel. He was known for being &#8220;a... View Obituary & Service Information

The family of James E. Messer Sr. created this Life Tributes page to make it easy to share your memories.

Send flowers to the Messer family.