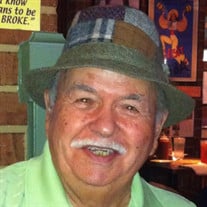 James “Jim” Duane Cramer, a resident of Theodore, Alabama, passed peacefully from this life on January 30, 2022, at the age of 84. He was born to James David Cramer and Ruth Eleanor Burgess on March 26, 1937 in McKeesport, Pennsylvania, though his stepmother, Marie Stack-Cramer, raised him for most of his younger years. Jim was the second born of three siblings. He married Nancy Ruth Carroll on June 28, 1969, and in 1971 they moved to Mobile and then Grand Bay, where they raised their four children. He spent his working years as a journeyman electrician with the IBEW Local 505 and retired in 2002. He started his military service at the age of 17 when he enlisted in the Marine Corp. He followed that two-year stint with service in the U.S. Navy serving in Vietnam with the Seabees. Jim was wounded in a plane crash and was forced to retire with disability benefits. Jim was a member of First Baptist Church of Grand Bay, St. Elmo Baptist Church, and then First Baptist Church of Tillman’s Corner where he enjoyed working in the accounting department. His brother, Robert “Bobby,” and younger sister, Roberta, preceded Mr. Cramer in death. Left to cherish his memory are his children, Kurt (Lisa) Cramer, Robert Cramer, and Joseph Cramer; grandchildren, Brandon Wilson, Emily Wilson, Tyler Cramer, Conner Cramer, Weston Cramer, Evan Cramer, Mallory Waguespack, and Jordan Cramer; nephews, William “Billy” Garrison and Michael “Mike” Garrison; other relatives, and friends. We would like to thank the caregivers who enriched his life for the last year, Melissa Howell and Kelli Hall. Visitation will be held on Friday, February 4, 2022 from 1-2 PM at Serenity Funeral Home, followed by service at 2 PM.

James &#8220;Jim&#8221; Duane Cramer, a resident of Theodore, Alabama, passed peacefully from this life on January 30, 2022, at the age of 84. He was born to James David Cramer and Ruth Eleanor Burgess on March 26, 1937 in McKeesport, Pennsylvania,... View Obituary & Service Information

The family of James Duane Cramer created this Life Tributes page to make it easy to share your memories.

Send flowers to the Cramer family.