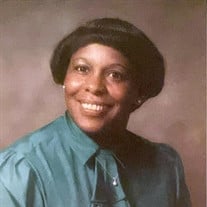 Irmatean Yelling Watson, age 81, a loving wife, mother, and grandmother, transitioned from her earthly home to be with the Lord on April 29, 2022. Irmatean was born on May 18, 1940 in Mobile, AL. After graduating from Central High School at just 17 years old, she continued her education by attending Florida A & M University, where she graduated with a BS degree in Pharmacy. While at FAMU, she was initiated into the sisterhood of Delta Sigma Theta Sorority, Inc. Beta Alpha Chapter. After practicing as a pharmacist in Washington D.C. for 5 years, she moved back to her hometown of Mobile, AL where she opened Watson’s Apothecary in the Happy Hill community in 1971 which was her first business. In 1977, Mrs. Watson opened Toulminville Medical Complex. She took extreme pride in serving communities that had been historically under-served. She later went on to expand her business enterprise into the airport concessions industry in 1986 with store locations at Mobile Regional Airport, Gulfport-Biloxi Regional Airport, and Birmingham-Shuttlesworth International Airport. She truly enjoyed the many relationships and experiences that were developed over her 50-year entrepreneurial career. Though her dedication to her community led her to serve as a community activist and to become active in politics, she never considered herself a “politician.” Irmatean was elected as an inaugural member and first African American on the Mobile City Council (District 1) serving 2 terms (1985-1993). Her philanthropic acts led to her being the “2009 Outstanding Partner in Education” honoree; an award she was given by the Mobile County Public School System for her generous work with Maryvale Elementary School. Her investment in the youth of Mobile created lifelong bonds with many, giving her the unofficial role as a community mother. She was preceded in death by her father, Alonzo Yelling, Sr.; mother, Eunice Cavanaugh Yelling; sisters, Altheris (Lionel) McConico, Rosa Fogg, and Netholia (Wilman) Plummer; brothers, Alonzo (Mary)Yelling, Jr. and Cavanaugh (Iris Taylor) Yelling; and son-in-law, Dr. Milan S. Yancy. She is survived by her devoted husband of 57 years, Willie “Billy” Watson; daughter, Tracy (Calvin Spencer) Yancy; three sons, William (Brandy) Watson, Charles (Lorena) Watson, and Christopher (Aneesha) Watson. She also leaves fond memories as a grandmother, lovingly referred to as “Nana” by her grandchildren, Vivian Yancy, Christina Yancy, William Watson II, Jaylen Foster, Braylen Foster, Tre’von Conner, Kaelyn Levarette, Isabelle Douglas, and Vincent Douglas; siblings, Grace Wyatt, Carolyn Davis, and Hattie Johnson; a multitude of nieces, nephews, cousins, other loved ones, and friends. Visitation will be held on Friday, May 6, 2022 from 10:30-11 AM at Friendship Missionary Baptist Church, followed by service at 11 AM.

Irmatean Yelling Watson, age 81, a loving wife, mother, and grandmother, transitioned from her earthly home to be with the Lord on April 29, 2022. Irmatean was born on May 18, 1940 in Mobile, AL. After graduating from Central High School at... View Obituary & Service Information

The family of Irmatean Yelling Watson created this Life Tributes page to make it easy to share your memories.

Send flowers to the Watson family.