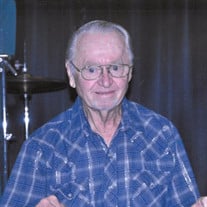 Herbert “Herbie” Donald Stewart passed into the arms of Jesus March 25, 2022. Born and raised in Mobile, Alabama, he was the youngest of four children. He attended Murphy High School and was drafted to the U.S. Army at the age of 20, near the end of the Korean War. At age 27, Herbert married and later became the loving and devoted father of two daughters, Ashley and Vikki, who loved him wholeheartedly. Herb was a faithful member of Forest Park Bible Church for 50 years and served as Chairman of the Board of Trustees for over 40 years. He loved Jesus and was so committed to following Him. Other than Jesus and his family, Herb’s one true passion began at the age of 5, the steel guitar. As a lifelong teacher and player, he loved every aspect of it, from making his own custom guitars to playing alongside the country’s most talented performers. He won Instrumentalist of the Year from the Mobile Country Music Association for many years and was inducted into the Mobile Country Music Hall of Fame. He also loved model airplanes, flying them for over 70 years. He recently became a member of the Academy of Model Aeronautics and could be found most weekends flying and enjoying the planes at the airfield. Herb held many jobs over the years, including lighting technician for one of the local TV stations, but he found his niche as a dental lab technician for many dentists, eventually owning his own company. Many of the dentists he worked with said that he was the best in the business. He was preceded in death by his parents, James Erastus and Eula Mae Stewart (Whittington); brothers, James Stewart and Leon “Bubba” Stewart; and sister, Lillie Mae Martin. He is survived by his daughters, Ashley Ann Dyk (Ric) and Vikki Larissa Bruszer (Brad); grandchildren, McKayla Dyk, Cullen Dyk, Braden Dyk, Emme Dyk, Audren Bruszer, Hudson Bruszer, and Gracyn Bruszer; other relatives, and friends. He will always be remembered for the way he loved his Savior and his family and his sweet, gentle smile. Visitation will be held on Friday, April 8, 2022 from 11 AM-12 PM at Serenity Funeral Home, followed by service at 12 PM. Interment will be held in Serenity Memorial Gardens.

Herbert &#8220;Herbie&#8221; Donald Stewart passed into the arms of Jesus March 25, 2022. Born and raised in Mobile, Alabama, he was the youngest of four children. He attended Murphy High School and was drafted to the U.S. Army at the age of... View Obituary & Service Information

The family of Herbert Donald Stewart created this Life Tributes page to make it easy to share your memories.

Herbert “Herbie” Donald Stewart passed into the arms of Jesus...

Send flowers to the Stewart family.