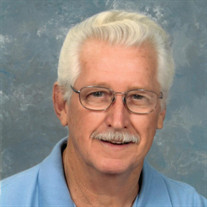 Henry Mason May, age 82, a resident of Semmes, AL, departed this earth for his heavenly home on April 28, 2022. Henry is preceded in death by his parents, Curtis A. May Sr. & Emma Lee Rivers May; siblings, Curtis A. May Jr., Dorothy May Wadsworth, Louise May Young, Yvonne May Dossett, & Dennis May. He is survived by his wife, Annette May; daughter, Christine Lewis (Brad); step-son, James McKinley; grandchildren, Meredith Lewis, Madalyn Lewis, Jessica Dern (Josh), Jimmy McKinley (Brandi), and Josh McKinley (Chrystal); 7 great-grandchildren; brother, Charles May (Barbara); sister-in-law, Alice May; nieces, nephews, other relatives, and many friends. Henry learned carpentry from his father at a young age. He served in the United Stars Air Force during the Vietnam War where he learned the trade of being an electrician. After leaving the Air Force, Henry, along with his father and brother, had a cabinet-making business. Henry later had his own business, Cabinets by Henry. After many years of self employment, Henry accepted a position at the University of South Alabama Medical Center as a cabinet maker. He retired from USA in 2005, however, retirement wasn’t for Henry so he became the handyman for his church, Pathway Church, of which he was a faithful member for about 50 years. He helped build their former and current Sanctuaries and helped start a Men’s Prayer meeting. He also began a bus ministry & brought in children on Sundays & Wednesdays on the church bus. Henry was a loving & devoted family man. He was a caring husband, father, & grandfather. He loved his church. He loved his family. He loved his wife of 48 years & became her caretaker until dementia & Alzheimer’s demanded that he relinquish that role. His granddaughters, Meredith & Mady, were the apples of his eye. They had their Poppy’s heart until his final day on Earth. Visitation will be held at Pathway Church (7200 Moffett Rd, Mobile, AL 36618) on Monday, May 2, 2022 from 5-6:30 PM, followed by service at 6:30 PM. Interment will be held in Serenity Memorial Gardens. The family would like to thank Dr. Tim Hecker & Brady Burge NP for their wonderful care & treatment for almost 10 years. Also thanks to Kindred Hospice for their loving care during the last stage of his long illness. No words can express our gratitude to Nurse Pege Crane & Hospice Aide Kaveni Taylor who wonderfully cared for Henry until the very end of his life. Also a big thank you to Your Choice Senior Care Sitter Service. Honorary Pallbearers are Bruce Young, Tim Young, Russell McDuffie, Greg Cowart, & Stuart Garrettson.

Henry Mason May, age 82, a resident of Semmes, AL, departed this earth for his heavenly home on April 28, 2022. Henry is preceded in death by his parents, Curtis A. May Sr. & Emma Lee Rivers May; siblings, Curtis A. May Jr., Dorothy May Wadsworth,... View Obituary & Service Information

The family of Henry Mason May created this Life Tributes page to make it easy to share your memories.

Henry Mason May, age 82, a resident of Semmes, AL, departed this...

Send flowers to the May family.