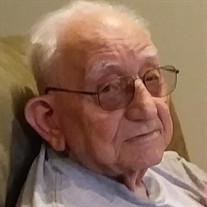 Rev. Harry Floyd Radcliff, age 94, of Irvington, AL passed away on Monday, January 31, 2022. Harry was born February 8, 1927 in Heron Bay, Alabama to Sarah Turner and James Albert Radcliff. Harry is survived by his daughters, Audrey Parker (Joe) and Sheri Willett (Roy); sisters Judy Hart; brother, Jacob Radcliff; granddaughters, Katherine Stephens (Frank) and Valerie Snow; grandsons, Rev. Joe D. Parker and Harry Willett (Heather); step-granddaughter, Norma Taylor (Jerry); great-granddaughters, Heidi Willett, Holly Willett, and Lily Snow; step-great-granddaughters, Victoria Keen, Kaleigh Taylor, and Mallory and Savanna Stephens; step-great-grandsons, Justin Taylor and Julian Stephens; nieces, nephews, other relatives, and friends. Harry was preceded in death by his wife, Merttie Radcliff; father, James Albert Radcliff; mother, Sarah Turner; sisters, Mary Johnson, Dessie Zirlott, Helen Rhodes, Hazel Landry, and Myrtie Jones; and brothers William Radcliff and Hugh Radcliff. He served in the Navy in World War II. Over his lifetime he was a shrimper, carpenter, and, along with his wife, opened Bayou Cash and Carry Lumber & Hardware in Bayou La Batre, AL. There they worked hard for 30 years helping the shipyards and families in the area with their building needs. He also was a licensed minister. He preached at many churches in the Bayou and Grand Bay areas. He loved his Lord and Savior and helped many friends and families throughout the area. He last preached at the Bayview Church of the Nazarene in Grand Bay, AL where he was a member and continued to attend. He also served on the City Council of Bayou La Batre, AL. He will be greatly missed by family, church family, and many friends, but we know he is rejoicing in heaven with his wife, mom, dad, brothers, sisters, and many more. A visitation for Harry will be held Wednesday, February 9, 2022 at 12:30 PM at Bayview Church of the Nazarene, followed by a funeral service at 2:00 PM. Harry will be laid to rest in Oddfellows Cemetery.

The family of Rev. Harry Floyd Radcliff created this Life Tributes page to make it easy to share your memories.

Send flowers to the Radcliff family.