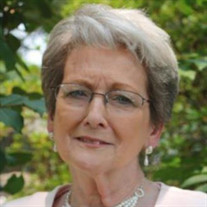 Gloria Diane Enriquez, age 77, a lifelong resident of Grand Bay, Alabama, made her transition from her earthly home to her heavenly home on Friday, March 25, 2022. She has seen Jesus, the One whom her soul loved, face to face. She was born on November 16, 1944 in Anniston, Alabama to Howard & Leila Oswalt. When she was 2, the family moved to Grand Bay. She attended Mobile County High School where she graduated in 1963. After high school, her first job was as a secretary at Liberty Mutual. During her lifetime, other jobs included working as a secretary at Pipefitters Union Local 436 in Pascagoula, Mississippi, but the one she loved most was working as a teacher's aide/paraprofessional within the Mobile County Public School System. She filled many roles including, but not limited to, working as a teacher's aide, library aide, and media specialist at Grand Bay Elementary, Nan Gray Davis Elementary, St. Elmo Elementary, Arlington Elementary, Craighead Elementary, and returned to Cora E. Castlen, where she retired after 33 years. As a young girl, her grandmother began teaching her piano using a church hymnal written using shaped notes. Her love of piano gave her initiative to learn on her own. She used her talent to provide music for weddings, funerals, school and church programs, and any other opportunity she was afforded. She served as church pianist at local churches, such as Friendship Baptist, Cloverdale Baptist, & Grand Bay First Assembly of God. She also taught piano lessons to many students with her oldest piano student starting lessons in her late 70s. Diane is survived by her husband of 55 years, Robert "Bob" Enriquez of Durango, Colorado; two daughters, Astra Dawn (Kevin) Turner of Theodore, Alabama and Paula Lorraine (Pete) Stovall of Grand Bay, Alabama; two sisters, Carol (Terry) Lucky and Laurel Gill, both of Grand Bay; one grandson, Caleb Johanan Turner; one nephew, Clay Prince; two nieces, Laurel (John) Smith and Alicia Gill; one great-niece, Abby Smith; and a host of extended family and friends. We are grateful and thankful for the services of Comfort Care Hospice, Serenity Memorial Gardens & Cemetery, and Grand Bay First Assembly of God. Visitation will be held on Tuesday, March 29, 2022 from 10 AM-12 PM, followed by service at 12 PM, at Grand Bay First Assembly of God. Interment will be held at Serenity Memorial Gardens.

Gloria Diane Enriquez, age 77, a lifelong resident of Grand Bay, Alabama, made her transition from her earthly home to her heavenly home on Friday, March 25, 2022. She has seen Jesus, the One whom her soul loved, face to face. She was born... View Obituary & Service Information

The family of Gloria Diane Enriquez created this Life Tributes page to make it easy to share your memories.

Send flowers to the Enriquez family.