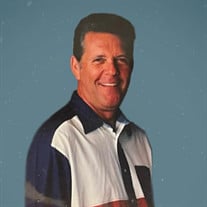 Glen "Cootie" Stork, age 76, a resident of Irvington, Alabama, born October 28,1945, passed away at home on January 24, 2022. Cootie was preceded in death by his parents, Earl and Erma Stork; brother, Kendall Stork; and loving and devoted wife of 40 years, Jenny Sue Stork. He is survived by his children, Randy (Kisha) Stork and Lucretia Stork (Mike Robbins); 6 grandchildren, Blake Johnson, Bradley Johnson, Aubrey Robbins, Chase Stork, Kayleigh Stork, and Maddox Stork; extended family members, and beloved friends. He graduated from Alba High School in 1964 and already was working at Seaman Fisheries with his mentor uncle, Kent Seaman. He married the love of his life, Jenny Sue, in 1968 and they lived their best life seeing Elvis Presley in Vegas, many casino trips, many rides around Coden beach, and dancing away at Christmas parties. In 1983 he partnered together with an immediate Stork family member and took over The Lighthouse Restaurant. Cootie and uncle ,Shorty Seaman, took great pride in fishing the waters of Mobile Bay to supply the mullet for the restaurant. He unloaded a great many boats at Stork Seafood owned by his parents. Cootie's love for Elvis Presley was passionate. He knew every song, every move, and every movie. He would play Elvis' songs just about everyday and he loved it. He would put a little hand move and shaking of the hips as he sang along. His favorite quote was "Taking Care of Business." Visitation will be held on Tuesday, February 1, 2022 from 12-2 pm at Serenity Funeral Home, followed by service at 2 pm. Graveside service will be held at Oddfellows Cemetery.

The family of Glen "Cootie" Randall Stork created this Life Tributes page to make it easy to share your memories.

Send flowers to the Stork family.