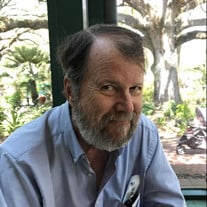 Judge Frederick Neville Stewart, age 72, of Dauphin Island, Alabama, passed away peacefully in his sleep in the loving arms of his wife, Victoria Stewart, on Aug. 27, 2021, after an almost two-year-long cancer battle. Fred was born on Aug. 28, 1948, in Manhattan, Kansas, to Chester and Maryellen (Henderson) Stewart. His family moved to Leavenworth, Kansas, when he was in the second grade, and he attended Leavenworth public schools, graduating from Leavenworth High in 1966 and achieving the rank of Eagle Scout. He attended Kansas State University and received his bachelor’s degree in political science. In 1967 he married Jane Morehouse, and they had two sons, Sean, born in 1975, and Jonas, born in 1979. Fred received his juris doctor in 1974 from the University of Kansas School of Law. After several years in private practice, Fred was elected as a district court judge in Leavenworth County in 1977 and served until his retirement in 2008. Fred was a Renaissance man. While he spent his days presiding over criminal proceedings and jury trials, he also built his own home, was an avid private pilot and scuba diver, and enjoyed going on camping and canoe trips with his large circle of friends. He was also an animal lover, a voracious reader, a HAM radio operator, and a member of the exclusive Dauphin Island Herd. Fred and his wife, Victoria, moved to Dauphin Island in 2009, where they were welcomed into the island’s community. He quickly became known as a go-to guy due to his vast knowledge and eagerness to help anyone who needed it. Fred volunteered for five years at the Dauphin Island Sea Lab, cleaning tanks and caring for the aquatic life at the aquarium. He served on the Board of Adjustments for the Town of Dauphin Island for the last six years. A globetrotter in later life, Fred enjoyed visits to Armenia, Mexico, Jamaica, Alaska, and multiple trips to Azerbaijan and Japan. On these adventures, he hiked the mountains to monasteries, explored jungle pyramids, dined with locals in a caravanserai on the Caspian Sea, strolled the Japanese Imperial Palace grounds, slept in a yurt, and once accidentally crashed an Armenian country wedding. He is remembered by his friends around the world. When Fred walked into Islanders Restaurant for Tuesday night trivia, members of other trivia teams would groan, knowing more often than not his team, “We Can’t Remember,” would take home the prize because of the encyclopedic reservoir of facts he could call to mind at a moment’s notice. He found joy in hosting guests, taking them on adventures in the local area, or day trips to New Orleans and other points of interest along the Gulf Coast. Fred was preceded in death by his parents. Survivors include his wife, Victoria (Henderson) Stewart of Dauphin Island; son, Sean Stewart (Portia Sisco Stewart) of Lenexa Kansas; son, Jonas Stewart (Angela Reese Stewart) of Budapest, Hungary; daughter, Kathleen Henderson Howlett (Sean Howlett) of Chicago, Illinois; four grandchildren, Donovan Stewart, Olivia Stewart, Moira Stewart, and Eleanor Stewart; sister, Harriette Stewart McCaul (Kevin) of Fargo, North Dakota; brother, Andrew Stewart (Susan) of Denver, Colorado; brother-in-law, Jim Henderson (Kim) of Daphne, Alabama; former wife, Karen Dirks Stewart of Lowemont, Kansas; and numerous nieces and nephews; other relatives, and many friends. Visitation will be held Wednesday, September 8, 2021 at 1:00 pm at Serenity Funeral Home, Theodore, AL on followed by a graveside service at 2:00 pm. Interment will be held in Serenity Memorial Gardens. In lieu of flowers, the family asks that donations be made to the Dauphin Island Bird Sanctuaries: PO Box 1295, Dauphin Island, AL 36528 or https://www.coastalbirding.org/donations.htm

Judge Frederick Neville Stewart, age 72, of Dauphin Island, Alabama, passed away peacefully in his sleep in the loving arms of his wife, Victoria Stewart, on Aug. 27, 2021, after an almost two-year-long cancer battle. Fred was born on Aug.... View Obituary & Service Information

The family of Frederick Neville Stewart created this Life Tributes page to make it easy to share your memories.

Send flowers to the Stewart family.