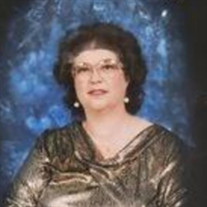 Born on May 27, 1947, in Mississippi, Edith Joyce Langan was the only daughter of Herman and Marie Wilkerson. She would remain not only the only daughter, but also the only child until right before her twelfth birthday, when her brother, Keith, was born, followed a few short months later by her youngest brother, Dale. By the time she was 14, she had two little brothers and two built-in lifelong friends. She was called Joyce by her family, and affectionately Edie, by her friends. Other than her family, she loved 3 things: Jesus, Elvis, and travel. After graduating from Theodore High School in 1965, she took a job with the Air Force at Brookley Air Field in 1968, serving for 44 years before retiring. During that time, she went to college and received her bachelor’s degree in Broadcast Journalism. She also traveled all over the world during that time. From cruises across the oceans to international travel, she was a woman on the move. Of all her travels, some of her most memorable adventures occurred close to home. During her civil service, she also had a fifteen-year-long career as a disc jockey, known as Wendy Jackson, for WBAM FM radio in Wetumpka, AL. While being Ms. Wendy, she met some of the biggest names in country music in the late 80s and early 90s. From George Straight to Joe Diffie and the members of the band, Alabama, her love of meeting new people didn’t stop in person. She also had penpals in lots of different area codes. She was a proud member of the Montgomery Chapter of The Red Hat Society. As she traveled, made many new friends and collected all things Elvis, she kept up with her brothers and her nieces and nephews, bringing home lots of souvenirs and making lifelong memories. She departed her earthly body on January 5, 2022 and is in the presence of her Lord and Savior, Jesus Christ. She is preceded in death by her parents, Herman and Marie Wilkerson; and brother, Keith Wilkerson. She is survived by her brother, Dale Wilkerson; nieces, Amanda, Sarah, Olivia, Tristan, and Abigail; nephews, Tim, Ryan, and Chip; sister-in-law, Melody Wilkerson; great nieces and nephews; and many more family and friends. Visitation will be held on Monday, January 10, 2022 from 1-2 PM at Serenity Funeral Home, followed by service at 2 PM. Interment will be held in Serenity Memorial Gardens.

Born on May 27, 1947, in Mississippi, Edith Joyce Langan was the only daughter of Herman and Marie Wilkerson. She would remain not only the only daughter, but also the only child until right before her twelfth birthday, when her brother, Keith,... View Obituary & Service Information

The family of Edith J. Langan created this Life Tributes page to make it easy to share your memories.

Send flowers to the Langan family.