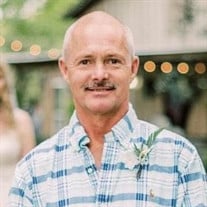 Earl Wallace Harvey, Jr., age 54, a resident of Mobile, AL, passed away December 9, 2021. He worked at Southern Tire Mart in Mobile, AL. He was an avid Alabama fan and enjoyed watching them play football (Roll Tide!). He loved spending time with his wife, children, grandchildren, and his fur baby, Sugar, as well as taking vacations with family in Pigeon Forge, Tennessee. He also loved spending time doing yard working and taking long walks with his wife. He was such a good-hearted man and a hard worker; he always helped people in need. There was never a dull moment being around Earl; he always had you laughing and always had a smile on his face. He will be missed. He was preceded in death by his father, Earl Harvey Sr. He is survived by his wife, Sheila Aston Harvey; daughters, Christina Scott (Justin), Megan Driggers (Travis), and Chelsea Davis (Jacob Lee); grandchildren, Payton Davis and Evelyn Scott; mother, Elsie May Harvey; brother, Robert Harvey; sisters, Elise Sayers (Russell) and Mary Ann Laskey (Gene Laskey); nieces, nephews, other relatives, and many friends. As per Earl wishes, a private memorial service will take place at a later date.

The family of Earl Wallace Harvey Jr. created this Life Tributes page to make it easy to share your memories.

Send flowers to the Harvey family.