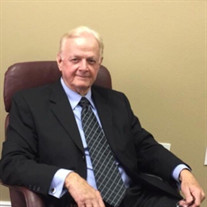 Donald M. Edeker, age 78, passed away on Thursday, September 23, 2021 in his home surrounded by his family and friends. He was born September 26, 1942. He proudly served his country in the Navy from 1961-1965. Shortly after, in 1972, the Lord called him to Moss Point, MS to be a pastor. He ministered and touched a lot of lives over the years, and will be missed immensely. He is preceded in death by his parents, Mose Edeker and Mildred Gullage; brothers-in-law, Jerry Rathel and Mason Webb; and nephews, Steven and Jerry-Wayne Rathel. He is survived by his wife of 62 years, Geraldine Lewis Edeker; daughters, Anita Geraldine Cole (Ronnie Cole) and Teresa Renee Cole (Anthony Cole); 6 grandchildren, Ronald Lamar Cole, Jr., Ashley Anderson (Brad Anderson), Kayla Courtney Cole, Kaycee Danielle Cole, Paige Tanner (Jeremy Tanner), and Teresa Brooke Tanner (Justin Tanner); 13 great-grandchildren with another one due April 2022; sisters, Darlene Laney, Frankie Webb, and Patsy Rathel; brother, Reggie Williamson; and many beloved nieces, nephews, other relatives, and friends. Visitation will be held at New Horizon Ministries Church, 10501 Hwy 63 Moss Point, MS 39562, on Monday, September 27, 2021 from 11 AM-1 PM, followed by service at 1 PM. Interment will be held in Serenity Memorial Gardens.

The family of Donald Milton Edeker created this Life Tributes page to make it easy to share your memories.

Send flowers to the Edeker family.