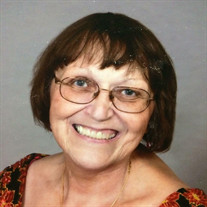 Deborah Anne Smith, age 72, passed away in Mobile, AL on October 25, 2021. Visitation will be held Friday, October 29, 2021 at the Theodore Church of God from 12:30–1 PM with a memorial service to follow at 1 PM. Mrs. Smith was a 1967 graduate of Tawas High School in Michigan and graduated from Lansing Community College in Lansing, Michigan. Later, she became a travel nurse where she lovingly cared for patients in many parts of the world. She was selected as Nurse of the Year at Bayonet Point Hospital in Hudson, FL. She was a devoted wife, mother, and grandmother. She was a faithful member of Theodore Church of God where she enjoyed praise and worship services. She always greeted people with a hug which earned her the nickname “Huggie.” She is preceded in death by her parents, John and Emma Cecilia Fortin LaLonde; grandson, Richard Baer; and siblings, Robert LaLonde, Deloris LaLonde, Charles LaLonde, Richard LaLonde, and Michael LaLonde. She is survived by her husband, Michael Smith; daughters, Charlene Baer, Deanna Mitchell (Billy), and Stephanie Kruse (Levi); son, Jeffrey Baer (June); grandchildren, Raquelle Cedres, Richard Cedres, Michaela Smith, Derek Mitchell, Sydney Kruse, Julianna Kruse, Jamaine Mitchell, Asia Thrasher, and Moesha Mitchell; brother-in-law, Alan Smith; nieces, nephews, other relatives, and many friends.

The family of Deborah Anne Smith created this Life Tributes page to make it easy to share your memories.

Send flowers to the Smith family.