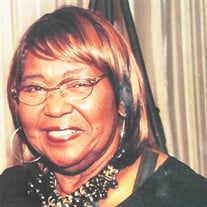 Ms. Cleretta Arizana Thomas-Blackmon, longtime Mobilian and publisher of Alabama's oldest, family-owned African-American newspaper, The Mobile Beacon, exchanged this life for her eternal reward with Christ on February 2, 2022. She was 82. Blackmon was a loving and devoted mother of two beloved children, and grandmother of one, all combined to equal her greatest accomplishments-son, Hjordis; daughter, Merina; and grandson, Justin. The local woman was truly a trailblazer in many arenas and passionate about life and the many endeavors she set her heart and hands to. The daughter of the late Frank P. and Lancie M. Thomas, Cleretta or Cle, as she was affectionately known by some close to her, spent her early life watching and learning the ropes of the newspaper industry under the caring tutelage of her parents, the founders of The Beacon, during a time of transition in the South and sometimes great turmoil. Her mom and dad were truly dedicated to the advancement of the communities they were honored to serve and this mission was passed down to their only child, Cleretta. Blackmon's father and mother were instrumental in desegregation of The University of Alabama at Tuscaloosa, where Mr. Thomas, a WWII veteran, had founded his own newspaper publication, The Alabama Citizen. In fact, Thomas accompanied Authurine Lucy, the university's first student of color, onto the campus of the then all-white school. Crusaders that he and his wife were, they led the publication of The Alabama Citizen in Tuscaloosa and Selma to cover stories in Alabama's Black Belt, and soon after started The Mobile Weekly Review in Mobile, AL on June 1, 1943, which would later become The Mobile Beacon and combine with The Alabama Citizen from north Alabama to become the state's longest-published, family-owned, Aftrican-Amercian newspaper. Cleretta earned her Bachelor of Science degree from Wayne State University in Detroit, MI, where she majored in Business Administration and Psychology, with a minor in Journalism. She spent many years serving as a social worker in Michigan for both the department of Education and Social Security Disability, before moving to Mobile to steer her parents' dream by taking the helm of The Mobile Beacon in the 1980s. The local publisher had a tireless work ethic and, like her mom and dad, set about helping her neighbors in times of need. Those who knew Cleretta knew that she would do whatever was in her power to lend a hand up to someone in need, quietly and compassionately. She was not ashamed of her confession of Christ and was quite passionate about her faith, even featuring many spiritual articles in The Beacon, including its signature seasonal messages of inspiration from local pastors in the Mobile area, on occasions like Christmas, Easter, and Thanksgiving. She was also very active in and devoted to her church, Hillsdale Presbyterian on Cody Rd in Mobile, for many years and also was active in the state and national levels of the Presbytery. Blackmon was instrumental in service with the National Newspaper Publishers Association (NNPA) for decades, along with the Black Press of America, The Alabama Press Association, and The National Newspaper Association. Blackmon was served on both the NNPA and APA Boards of Directors, and had been on the national NNPA Bylaws and Archives Committee. Blackmon served as Treasuer of the National Council of Negro woman and was instrumental in the NAACP, where she served as Secretary. The community activist served as past Treasurer of the National Presbyterian Health, Education, and Welfare Association. In addition, she served locally in leadership capacities including as two-term Vice President for The Oakleigh Chapter of the American Business Women's Association, on the Communication Committee of The United Way, and Mobile Area Chamber of Commerce. She served for many terms as Chairperson of The Epilepsy Foundation of Alabama. Blackmon also always supported local youth and educational efforts and programs and acted as a mentor for numerous young journalists during her tenure in the industry. Her enthusiasm and devotion will be remembered, along with her love of family, friends, and community. Cleretta loved to travel, dress well, play bridge, listen to good music, and attend galas and functions, but she never forgot her roots or foundation and could share a table with a pauper or a prince, with the same lovely positive outlook and kind word, without intimidation, secure in who she was and her mission and focus in life. During her final several years of life, she was cared for lovingly and tirelessly by her daughter, Merina, in Montgomery, AL. She spent her last weeks resting peacefully and singing Christian hymnals from her bed at SAAD's Hospice off University Blvd in Mobile, AL. The family of Ms. Blackmon is especially thankful to her doctors and the dedicated team of nurses and staff at this exceptional facility. Blackmon was preceded in death by her loving parents, Frank and Lancie Thomas, both of whom are in the National Hall of Honors for the NPA and APA, respectively; and the father of her children, Arthur Blackmon. She leaves to cherish her memories, her loving children, Hjordis Blackmon and Merina G. Blackmon; grandson, Justin Bankston; along with a host of friends and family, including a beloved and dedicated loved one, "like a sister to her," Akima Abrakata; niece, Valencia Jackson; as well as devoted friend and Beacon co-worker of many years, Mrs. Irma Love; along with too many others to name in one sitting. Cleretta touched many lives and will be dearly remembered by those who were blessed to have known her! Visitation will be held at Serenity Funeral Home on Tuesday, February 8, 2022 from 12-2 PM, followed by service at 2 PM. Interment will be held in Lawn Haven Memorial Gardens. Afterwards, a repast will be held at the Serenity Event Center from 3-5 PM. "The Lord himself goes before you and will be with you; he will never leave you nor forsake you. Do not be afraid; do not be discouraged." -Deuteronomy 31:8

The family of Cleretta Arizana Blackmon created this Life Tributes page to make it easy to share your memories.

Send flowers to the Blackmon family.