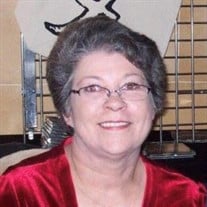 Christine Rhodes Bosarge, age 63, passed away on Tuesday, September 7, 2021 and was a longtime resident of Irvington, AL. She graduated from Alba High School in Bayou La Batre in 1976. In 1985 she graduated from Southwest Tech of Mobile, AL... View Obituary & Service Information

The family of Christine Marie Bosarge created this Life Tributes page to make it easy to share your memories.

Send flowers to the Bosarge family.