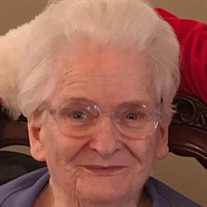 Carolyn Lucille Boone, 85, passed away in Columbus, MS on August 13, 2021. A visitation will be held at Serenity Funeral Home on Saturday, August 21, 2021 from 1-2 PM with a chapel service to follow at 2 PM. Interment will be at Mobile Memorial Gardens. She is preceded in death by her husband, Thomas Clay Boone, Sr.; and son, Tommy Boone. Mrs. Boone is survived by her daughters, Nancy White (Jim) and Debbie Murray (Craig); son, Ben Boone; sister, Bonnie Vaughn (Leonard); grandchildren, Kathie Pendry (Jim), Sarah Boone, Lisa Oakley (Ron Goodwin), Michelle Davis (Cory), Clay Boone (Megan), Steven Murray (Brittany), Josh Boone (Chelsea), Chane White (Catherine Murphy), Malaya Boone, and Thomas Murray; several great grandchildren; other relatives, and many friends. Carolyn was the daughter of Charles Carroll and Nancy Lucille Odom Morrison, Sr. She had three younger siblings, Charles, Bonnie, and Patricia. Growing up in Eight Mile, AL, Carolyn was active in her church and school. She graduated from Vigor High School and attended Spartanburg Junior College in Spartanburg, SC. Carolyn married Thomas Clay Boone, Sr. on November 26, 1955. Thomas and Carolyn raised four children and assisted in raising three grandchildren. She and Thomas lived in Georgia, Alabama, and Mississippi. Later in life they lived in both Saudi Arabia and Germany. During these years they were fortunate to visit many countries around the world. Carolyn was a mother, homemaker, and business owner. Her lifelong interest in crafts led her to open ceramic and fiber craft stores as well as a wholesale nursery. Her faith was important to her and she became an active member of primarily Methodist churches in each community in which she resided. She remained committed to her husband, children, and grandchildren throughout her life and enjoyed remaining in close contact with many lifelong friends.

Carolyn Lucille Boone, 85, passed away in Columbus, MS on August 13, 2021. A visitation will be held at Serenity Funeral Home on Saturday, August 21, 2021 from 1-2 PM with a chapel service to follow at 2 PM. Interment will be at Mobile Memorial... View Obituary & Service Information

The family of Carolyn Lucille Boone created this Life Tributes page to make it easy to share your memories.

Carolyn Lucille Boone, 85, passed away in Columbus, MS on August...

Send flowers to the Boone family.