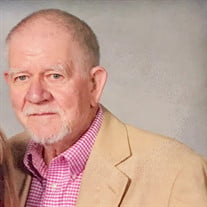 Aaron “Brad” Bradley, age 77, a resident of Mobile, Alabama, passed away on Monday, August 30, 2021 after a short battle with cancer. He was preceded in death by his father, Owen C. Bradley; and his sister, Anita Bradley McKeough. Aaron served in the United States Army in the Vietnam War from November 1965 to November 1966. Aaron was known by many names to many people, but all knew him to be a caring man who had a way of making anyone around him feel special. He worked hard as a UPS driver for 30 years where he developed relationships with his customers who became friends. His church family was so important to him and his daily life. He loved giving whether it was peppermints and gum at church or candy to people at the bank; he enjoyed the act of giving to other people. He was also the first to help anyone who was in need, whether that be his three daughters, someone at church, or someone he didn’t even know. Aaron was a tremendous sports fan. He was an avid Alabama football fan, watching all of the games in the “Alabama room” in his home. He enjoyed all kinds of sports and being part of several softball teams for more than 25 years. The three names he loved the most were husband, Dad, and PawPaw. He was the best husband and father of three daughters. He was PawPaw to six grandchildren and two great grandchildren. He dearly loved his family with all of his heart as family was so very important to him. He was always the first to call on your birthday or to send you a birthday text. He never missed any celebration that involved family. He showed up for all of the important stuff in life and his presence will be dearly missed by all. He is survived by his wife, Sandra Fairchild Bradley; daughters, Kim Bradley Howard (Steven), Sonja Bradley Ivey (Blane), and Alesia Bradley Schulz (Ryan); grandchildren, Brett Ivey (Katie), Whitney Howard Colombo (PJ), Craig Ivey (Brittany), Kasey Howard Ballard (Hunter), Cooper Schulz, and Peyton Schulz; great-grandchildren, Conrad Ivey and Pac Colombo; mother, Frances Day Bradley; other relatives, and friends. Visitation will be held on Friday, September 3, 2021 at First Baptist Church Tillman’s Corner from 5-7 pm. Funeral will be held on Saturday, September 4, 2021 at First Baptist Church Tillman’s Corner at 10 am with graveside service to follow at Serenity Memorial Gardens. Pallbearers will include Steve Howard, Blane Ivey, Brett Ivey, Craig Ivey, Vince McKeough, Ryan Schulz, and honorary pallbearer, Cooper Schulz In lieu of flowers the family requests that donations be made to one of the following organizations: Lustgarten Foundation Pancreatic Cancer Research https://lustgarten.org/donate/ Community Missions Fund of First Baptist Tillman’s Corner https://fbtc.org/give/

Aaron &#8220;Brad&#8221; Bradley, age 77, a resident of Mobile, Alabama, passed away on Monday, August 30, 2021 after a short battle with cancer. He was preceded in death by his father, Owen C. Bradley; and his sister, Anita Bradley McKeough.... View Obituary & Service Information

The family of Aaron Bryant Bradley created this Life Tributes page to make it easy to share your memories.

Send flowers to the Bradley family.